Fighting Mad Outruns Them in Grade I Hirsch at Del Mar 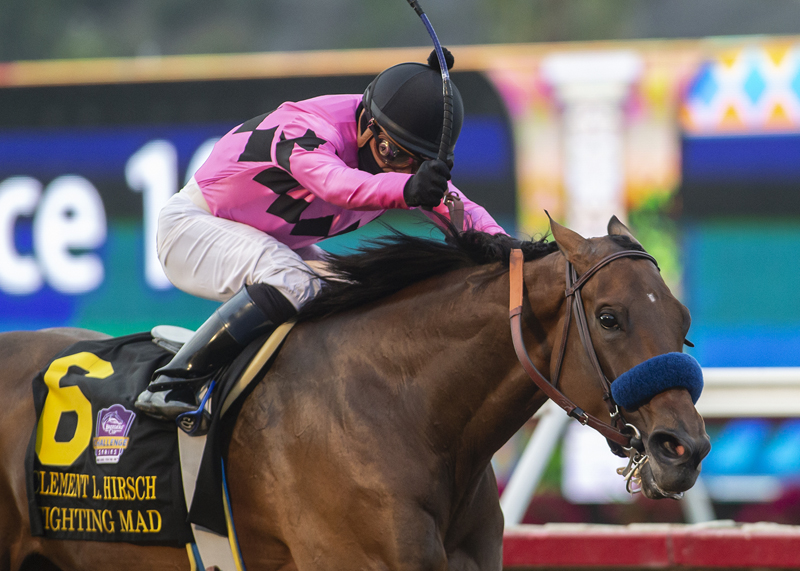 Gary and Mary West’s homebred filly Fighting Mad bolted out of the gate to the lead Sunday in the $250,000 Clement L. Hirsch Stakes and then never looked back, outrunning five classy rivals to capture the first Grade I race of her career.

Abel Cedillo was aboard the 4-year-old daughter of New Year’s Day as she covered a mile and one-sixteenth in 1:43.46 for her half-length tally. She is trained by Hall of Famer Bob Baffert

Finishing second in the filly-mare headliner was Paul or Karen Eggert’s Ollie’s Candy, who had won this race last year. Running third was Bo Hirsch’s Ce Ce. Hirsch is the son of the man the race is named for.

Because she took the Hirsch, Fighting Mad is now a “Win & You’re In” Challenge Race winner, meaning she gets a guaranteed spot in this year’s $2-million Breeders’ Cup Distaff along with all her fees paid for the championship race. The nine-furlong crucible runs Saturday, November 7 at Keeneland in Lexington, KY.

Saturday, Baffert and Cedillo had scored in the Shared Belief Stakes with Thousand Words in a very similar scenario to today’s Hirsch. He, too, was quickly sent to the front and made every pole a winner. The pair also teamed earlier in the session with the Wests’ Maximum Security to win the San Diego Handicap.

Earlier on the card, C T R Stables’ Positivity, ridden by Drayden Van Dyke, withstood a claim of foul and won the $100,500 Graduation Stakes for 2-year-old California breds by half a length. The Paynter colt ran five and a half furlongs in 1:05.49 and picked up a winner’s share of $57,000.

J. Kirk and Judy Robison’s Good With People made all the fractions in the race, but tired late and had to settle for second. KMN Racing’s Scooby was third.

Positivity won his only other start – a straight maiden race at Santa Anita on May 22 – and now has $87,000 on his earnings ledger.

The victory for his trainer, Luis Mendez, was his second at Del Mar. Last year he won this same race with Big Returns via disqualification.

ABEL CEDILLO (Fighting Mad, winner) -- “I had the same instructions today that I had yesterday (for his victory on Thousand Words for trainer Bob Baffert in the Shared Belief Stakes). Get her out of there and see if you can get to the front. She really broke sharply and want to go right away. I got her to relax some on the backside, then she went right on with it. She’s just an amazing filly.”

BOB BAFFERT (Fighting Mad, winner) – “I was a little bit worried about her because she was getting pretty warm in the paddock. But Abel (Cedillo) knows her pretty well and he knows speed is her weapon. To look at her you wouldn’t think she could go (a distance), but when she started opening up, I figured he must know what he’s doing. Basically, she ran them off their feet. The way she acted in the paddock, she ran an incredible race. She was trembling and sweating and I was worried, but once the race started she was pretty serious. ”

The stakes win was the fourth of the meeting for rider Cedillo, but his first in the Clement L. Hirsch. He now has six stakes wins at Del Mar.

The stakes win was the third of the meeting for trainer Baffert, but his first in the Clement L. Hirsch. He now has 136 stakes wins at Del Mar, far and away the most of any trainer.

The winning owners (and breeders) are Gary and Mary West of Rancho Santa Fe, CA.