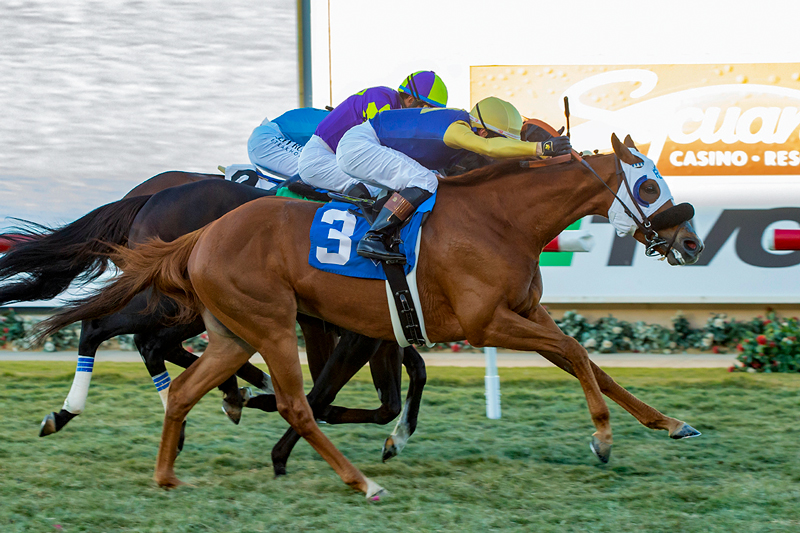 The 5-year-old Irish-bred gelding Hong Kong Harry closed with a rush outside  and nipped a pair of rivals on the wire Saturday in a thrilling renewal of the $251,500 Seabiscuit Handicap at Del Mar. He ran the mile and one-sixteenth on turf in 1:39.79, just 29 hundredths of a second off the course standard.

The winner, owned by the partnership of Scott Anastasi, Jimmy Ukegawa and Tony Valazza, was ridden perfectly by Flavien Prat for trainer Phil D’Amato, who was winning the stakes for the fourth time.

Finishing second in the Grade II headliner, just a neck behind Hong Kong Harry, was C R K Stable’s Beyond Brilliant, who actually made the lead in the final sixteenths for rider Victor Espinoza, only to be nodded at the finish. The third-place finisher – just another head back -- was Rockingham Ranch’s Masteroffoxhounds, who had cut out all the splits and hung on tenaciously under Mike Smith.

Though the final time just missed the course record, it set a new mark for the Seabiscuit, which was being run at Del Mar for the ninth time. The previous mark was 1:40.84 by Count Again in 2020.

The track’s popular Pick Six Single Ticket Jackpot wager was not hit for the ninth day in a row. That means it will offer a carryover bonus of $345,325 on tomorrow’s program, which has a first post of 12:30 p.m.

FLAVIEN PRAT (Hong Kong Harry, winner) – “The trip worked out right and coming for home – the way my horse was running – I thought I was a winner for sure. But then those two horses in front of me (Beyond Brilliant and Masteroffoxhounds) didn’t stop running. It was close, but we got there. He’s a good horse; I think he might be a Grade I horse off this race.”

PHIL D’AMATO (Hong Kong Harry, winner) – “I told Flavien to ride him with a lot of confidence. He’s been breezing him the last couple of times on the turf and his last breeze was probably one of his best ever. So I knew it was all systems go and I left it up to the top jock to get the job done.”

The stakes win was the third of the meet (and third of the weekend) for rider Prat and his second (Hunt, 2017) in the Seabiscuit. He now has 83 stakes wins at Del Mar, 10th most among all riders.

The stakes win was the second of the meet for trainer D’Amato and his fourth in the Seabiscuit. He now has 43 stakes wins at Del Mar.

The winner is owned by Scott Anastasi (of Hermosa Beach, CA), Jimmy Ukegawa and Tony Valazza.