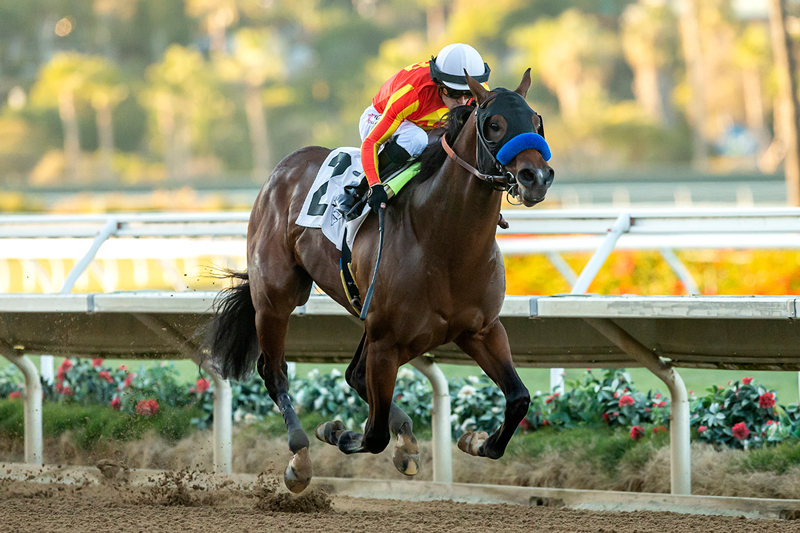 Odds-on favorite Havnameltdown walked his beat Sunday at Del Mar in the $100,000 Bob Hope Stakes and came away a length and a quarter winner in the Grade III feature for 2-year-olds at seven furlongs.

The husky colt by the Florida sire Uncaptured continued his fine performances at the seaside oval as he registered his third win in four starts at the shore this year. Two of those victories were stakes and his only loss was a second-place finish to stablemate Cave Rock in the Grade I Del Mar Futurity.

Havnameltdown is owned by the trio of Mike Pegram, Karl Watson and Paul Weitman. He’s trained by Del Mar kingpin and Hall of Famer Bob Baffert and was handled by the track’s leading rider, Juan Hernandez. He ran the seven panels in 1:21.68. The stakes victory was Baffert’s 154th at Del Mar, adding to his record total that has him 69 winners ahead of his next closest pursuer.

Racing will next happen at Del Mar on Thanksgiving Thursday when the track will hold an early eight-race program starting at 11 a.m.

JUAN HERNANDEZ (Havnmeltdown, winner) – “He broke nice and easy today. Before in his races he was slinghotting out of there. Today he was more professional. Our other horse (trainer Baffert’s Hard to Figure) inside of us on the rail was trying to get out into us, but my horse took it well. He’s learning how to run. After we cleared that other horse, I had a nice trip from there.”

JIMMY BARNES (Havnameltdown, winner) – “He broke well and sat just off them there. Newgate was in a position where he had a good chance and they both finished together down the stretch so we couldn’t be happier. He’s (Havnameltdown) developed into a really nice horse and he likes it here at Del Mar.”

The stakes win was the fourth of the meet for rider Hernandez, but his first in the Bob Hope. He now has 31 stakes wins at Del Mar.

The stakes win was the second of the meet for trainer Baffert and his sixth in the Bob Hope. He now has a record 154 stakes wins at Del Mar.

The winning owners are Mike Pegram, Karl Watson and Paul Weitman. Pegram lives locally and Watson and Weitman are from Tucson, AZ.