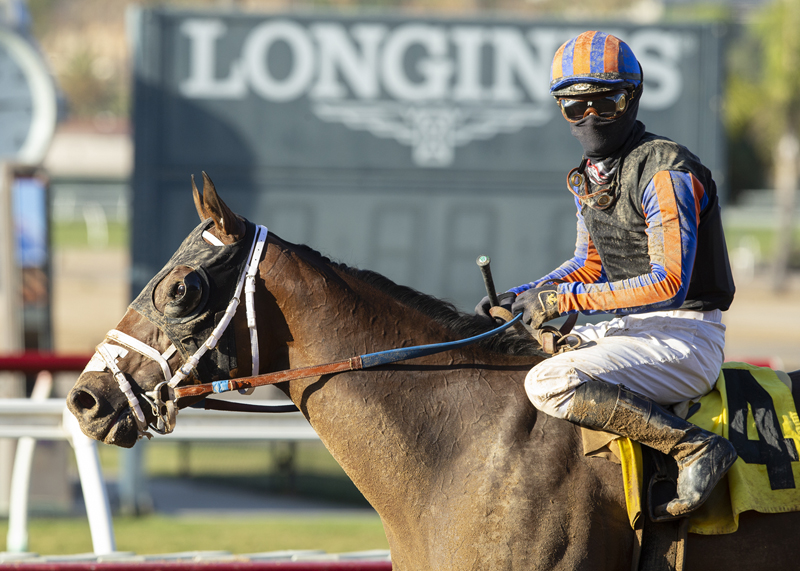 The winner was handled by Flavien Prat, who was scoring his fifth stakes win of the meeting in its eighth day. It was his third victory of the afternoon to move him to 14 firsts so far, one behind meet leader Umberto Rispoli.  It was the ninth tally of the session for trainer Peter Miller, who holds a commanding lead in the trainer standings.

He is owned by the partnership of Slam Dunk Racing (Nick Cosato) and Michael Nentwig.

FLAVIEN PRAT (El Tigre Terrible, winner) – “He broke just a bit slowly today, so he put himself in behind the leaders and was comfortable there. We had good pace to run at, so that was good. When it came time for him to perform, he performed.”

PETER MILLER (El Tigre Terrible, winner) – “It was very frustrating, he’s had two very bad trips the last two races and I thought he was getting in trouble again here. He had a horse to his outside and it looked like he was running up on heels again. But Flavien (Prat) knew what he was doing and he was the best horse. I am very nervous in those moments. He’s a hard-trying little horse with a lot of ability. He loves Del Mar and we hope we can get him in again before the end of meeting.”

The stakes win was the fifth of the meet for rider Prat (no other rider has more than two) and his third in the Real Good Deal. He now has 49 stakes wins at Del Mar.

The stakes win was the second of the meet for trainer Miller and his second (2014, Red Outlaw) in the Real Good Deal. He now has 31 stakes wins at Del Mar.