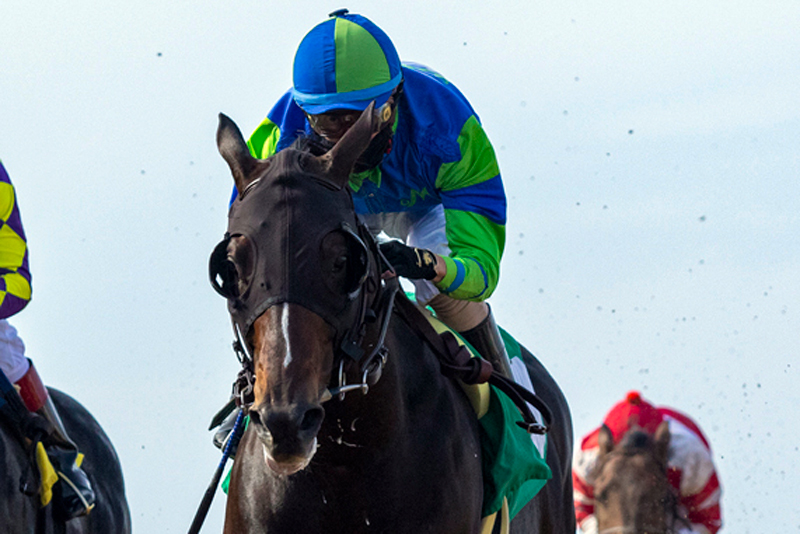 This year – in another four-horse field – the roles flipped.

Extra Hope and rider Juan Hernandez made the lead out of the gate and led Midcourt and Victor Espinoza from break to finish, scoring nicely in the $100,000, Grade III. His winning margin was only a length, but in the counting house and the record books a win is most certainly a win.

Extra Hope, a 4-year-old colt by Shanghai Bobby, earned a check for $60,000 for capturing his first stakes race and increased his bankroll to $294,831 with his fourth win in 14 starts. The victory was extra sweet for the lady behind Jay Em Ess Stable --Samantha Siegel. She also bred Extra Hope.

Finishing third in the lineup was Hronis Racing’s Combatant and filling out the field was Fox Hill Farms and Siena Farm’s Royal Ship, who stumbled badly out of the gate and nearly unseated rider Mike Smith.

Leading rider Abel Cedillo had a pair of victories on the afternoon and now has 16 winners in the first 10 days of racing. Best performance by a rider on the afternoon though went to Flavien Prat, who registered three firsts. He now sits in second place in the jockey standings with 10 wins.

Racing resumes tomorrow at Del Mar with a nine-race card beginning at 12:30 p.m.

JUAN HERNANDEZ (Extra Hope, winner) – “That was the plan – to go for the lead right away. He helped me a lot the way he broke so good out of there. Then he was running nice an easy for me; he was relaxed. At the quarter pole I asked him and he gave me a good reply.”

RICHARD MANDELLA (Extra Hope, winner) – “That’s (front running) what we planned with Extra Hope. I told (Juan Hernandez) ‘Spin the tires’ out of the gate a little bit. He (Extra Hope) kind of doesn’t take life real serious, so he wasn’t getting out of his training what he needed to before his first race off the layoff. But the one race did it. He’s been doing good since then. We’ll look at the Big ‘Cap (next year) and possibly the San Antonio on opening day at Santa Anita.”

The stakes win was the first of the meet for rider Hernandez and his first in the Native Diver. He now has five stakes wins at Del Mar.

The stakes win was the second of the meet for trainer Mandella, but his first locally in the Native Diver. He now has 67 stakes wins at Del Mar, the sixth most among all trainers.