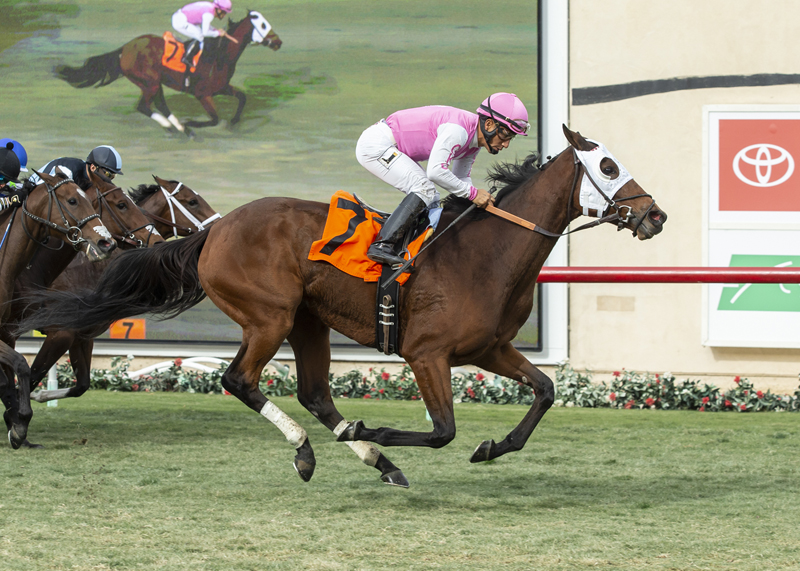 Claimed for $8,000 in September of 2018,  Zuzanna, the longest shot in the field of older fillies and mares at 23-1, climaxed her rise to prominence with a surprise victory in the Grade III Red Carpet Handicap at the marathon distance of a mile and three-eighths on the grass Saturday.

Providing jockey Paco Lopez with his second stakes success of the afternoon, Zuzanna surged to the lead in the stretch and then held off the late challenge of 17-1 outsider Curlin’s Journey to win by a length and one-half in 2:16.29 over a “good” Jimmy Durante Turf Course.

Zuzanna, a daughter of Wilburn, was claimed by trainer Bob Hess at Los Alamitos on behalf of an ownership group including Brian Ferguson, Kurt Hoover and Jeffrey Lambert. Sidelined for several months while recovering from throat surgery, the five-year-old mare returned to action and now has won four of nine starts for her new owners. For her career, she has a record of nine victories in 32 outings and first prize of $60,000 Saturday increased her total earnings to $271,751.

Third was Vibrance, a head behind Curlin’s Journey and a nose in front of fourth-place Strike At Dawn in the field of seven distaff runners. Withdrawn from the race was morning line favorite Siberian Iris.

Earlier on the program, Lopez won the Jimmy Durante Stakes astride Alms. Hess also won the third race with Riding With Dino.

PACO LOPEZ (Zuzanna, winner) – “Bob (Hess, trainer) told me I could put her anywhere I wanted to in the race. Front, back, inside, outside. He said this mare would run anywhere you wanted. So I rode her with a lot of confidence. I had a bit of trouble on the turn (for home).  Horses inside and outside me. But I got clear and she was game.”

RUBEN FUENTES (Curlin’s Journey, second) – “If I didn’t  have a little trouble in the stretch, I’m going to win it. She ran great.”

JOHN VELAZQUEZ (Vibrance, third) – “I got in tight at the quarter pole and I had to wait, wait, wait.  Once I got clear, she came running.”

BOB HESS, JR. (Zuzanna, winner) – “I really wasn’t looking at this race. I had her (booked) on a plane next week to go to Florida for the claiming crown. But Kurt (part-owner Kurt Hoover) nudged me to go here. My reservation (about running) was that I’ve never trained an $8,000 claimer to win a Grade III. But on the other hand, we thought a mile and three eighths could work, she loves Del Mar and she really worked well over this turf course. To me, she’s an easy read; when she’s ready, she’s ready and she said, ‘Hey Bob, let’s run.’”

The stakes win was the second of the meet (earlier in the day he won the Jimmy Durante Stakes), but  first in the Red Carpet Handicap for rider Lopez. He now has two stakes wins at Del Mar.

The stakes win was the first of the meet and the first in the Red Carpet for trainer Hess. He now has 12 stakes wins at Del Mar.

The winning owners are Kurt Hoover and Brian Ferguson of Los Angeles and Jeff Lambert of Del Mar.