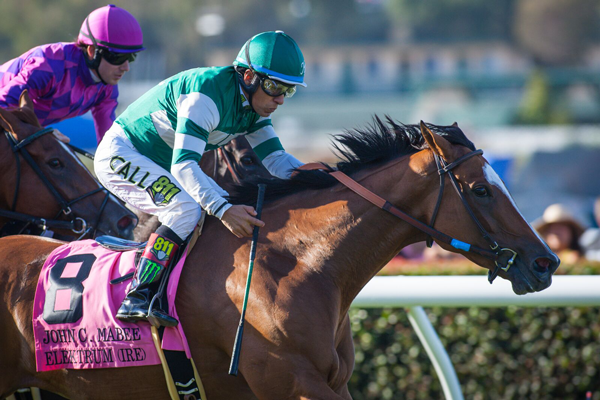 Irish-bred Elektrum and jockey Victor Espinoza proved narrowly best in an exciting blanket wind-up to the Grade II $250,000 John C. Mabee Stakes for older fillies and mares Saturday.
With a sixteenth of a mile to travel in the nine-furlong race over the infield Jimmy Durante Turf Course, it appeared as many as five runners had a chance at first prize. However, Elektrum gamely forged to the front nearing the wire to score by a head over Queen of The Sand. Emotional Kitten was another neck back in third and the same margin in front of fourth-place Fanticola, the 8-5 favorite. Personal Diary, victress in the 2014 Del Mar Oaks, was fifth, beaten less than a length in the eight-horse field. Gusto Dolce was withdrawn from the original line-up.
Elektrum, a four-year-old filly by High Chaparral owned by Hronis Stable and trained by John Sadler, accomplished the distance in 1:48.55 and returned $8.60, $4.40 and $3.60 as the second choice. It was her fourth win in 15 races and first money of $150,000 almost doubled her career earnings to $299,43.
Queen of The Sand, who was piloted by Drayden Van Dyke, paid $8.40 and $4.80, while Emotional Kitten paid $3.80 to show.
Saturday’s co-feature, the Grade II $200,000 Best Pal Stakes for two-year-olds, was won in impressive style by even-money favored Nyquist, under jockey Mario Gutierrez.
Nyquist, a son of promising freshman sire Uncle Mo, took command authoritatively turning for home and drew out to win by five and one-quarter lengths in 1:16.84 for the six and one-half furlongs on the main track.
Swipe, 5-2 second choice, rallied to be runner-up, a half-length in front of Annie’s Candy, with Bistraya fourth in the field of six two-year-olds.
Nyquist, a $400,000 purchase at the Fasig Tipton Florida sale of two-year-olds in training last March, is owned by the Reddam Racing, LLC of J. Paul Reddam who was scoring his ninth win of the Del Mar summer season. The Kentucky-bred colt is conditioned by Doug O’Neill.
Nyquist, who broke his maiden in his only previous start two months ago at Santa Anita, earned $120,000 for his Best Pal triumph and now has a bankroll of $153,600. He returned $4, $2.60 and $2.40. Runner-up Swipe paid $3.40 and $2.40 while Annie’s Candy returned $3 to show.
The Best Pal Stakes is the major steppingstone for juveniles to the Grade I $300,000 Del Mar Futurity on closing day, Sept. 7, the seven-furlong event which last summer launched American Pharoah on the road to Triple Crown fame.
In another noteworthy performance Saturday, John M. Liviakis’ debuting two-year-old colt, Young Brian, a son of Hard Spun, won the third race by ten and one-quarter lengths in 1:17.10 for the six and one-half furlongs under Rafael Bejarano. The Phil D’Amato-trained youngster paid $4.40 as the favorite.
Attendance Saturday was 24,723.
VICTOR ESPINOZA (Elektrum, winner) – “I had to work hard at the end. But it was worth it! She ran good. But they caught me by surprise. They all came at me at once. But she’s a fighter. She was strong at the end. We got it done.”
DRAYDEN VAN DYKE (Queen of The Sand, second) – “You’ve got to ride her; right from the start. If you don’t stay after her, she’ll drop 20 lengths out of it. I got in position at the three-eighths (pole) so (leader) Fanticola didn’t get too far away, then I made my move. Got bumped some by Emotional Kitten, but my mare ran a helluva race. She’s really game.”
GARY STEVENS (Emotional Kitten, third) – “It was a great race; classic turf finish. I’ve got no excuses. My mare ran hard. She ran her race.”
JOE TALAMO (Fanticola, fourth) – “We saved every inch and she ran all the way. She ran a good one.”
JOHN SADLER (Elektrum, winner) – “If you looked at her last race she was probably best (but had a troubled trip). And the filly that beat her went right to Saratoga and won a stakes for Christophe Clement. So the form was real solid and that’s why she got bet down a bit. After the last race Victor (Espinoza) rode the winner for Clement, but he told his agent ‘Let’s ride John’s filly next time.’ So he kind of hustled me for the mount and I decided to go ahead and put him on. She’ll go up to Santa Anita in the mile and a quarter Rodeo Drive. We think more distance is right in her wheelhouse. She had to make a little earlier run today than I thought, but she ran really well.”
FRACTIONS:  :24.04  :48.03  1:12.21  1:36.56  1:48.55
The stakes win for rider Espinoza is his first of the meeting and his first in the John C. Mabee. He now has 84 stakes wins at Del Mar, tied for seventh (with Gary Stevens) all time.
The stakes win was the first of the meet for trainer Sadler, but his third in the Mabee. He now has 51 stakes wins at Del Mar, sixth most among all conditioners.
The winner is owned by Hronis Racing, which is the nom de course of Kosta and Pete Hronis of Delano, CA.