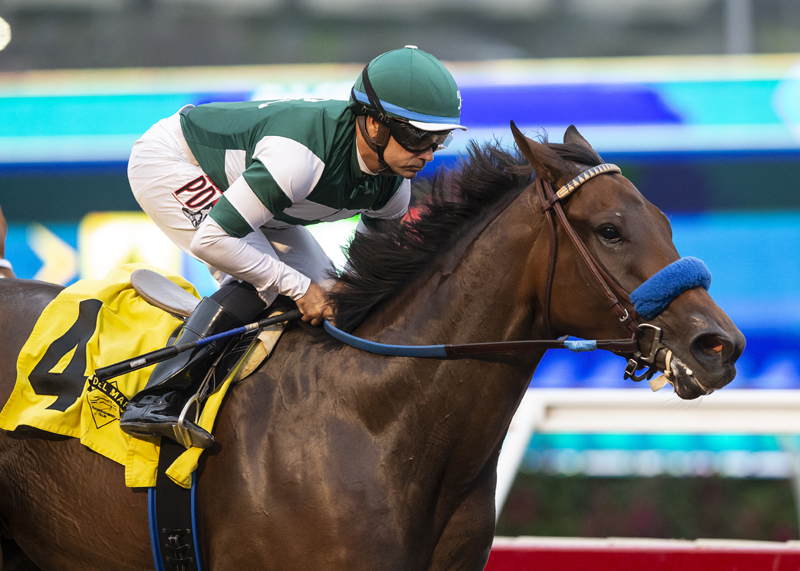 Hronis Racing’s Edgeway, the even-money favorite in a short field of four fillies and mares, went about her business in fine fashion Friday afternoon and came away a one-length winner in the 50th edition of the Grade III, $100,000 Rancho Bernardo Handicap at Del Mar.

The 4-year-old daughter of Competitive Edge covered six and one-half furlongs in 1:16.80 under Joe Bravo and won her race in easier fashion than the margin would indicate. She also gave her trainer, John Sadler, his sixth victory in this distaff sprint going back to a fine filly named Track Gal the conditioner saddled to win the race in 1995, ’96 and ’97.

In the track’s Pick Six Single Ticket Jackpot wager, for the 18th straight time a single bettor couldn’t tab all six winners on his or her own meaning there will be yet another carryover into Saturday’s TVG Pacific Classic Day card where a “mandatory” payout awaits. Today’s carryover amount of $1,874,996 will be in the pool to start the day tomorrow and it and all the “new” money that comes in on the bet will go out to those who have the most winners, guaranteed.

Some projections put the likely “new” money amount in the $6- to $10-million range. If so, it will virtually ensure that the track will best its non-Breeders’ Cup single-day betting record of $25,870,431 set on August 18, 2018, a TVG Pacific Classic Day.

Finishing second in the Rancho Bernardo was Gem Inc and Kagele’s Proud Emma, while pulling in third was Don Alberto Stable’s Stellar Sound.

Racing for the big TVG Pacific Classic Day card begins at 2 p.m. Saturday. Eleven races will be on tap with the Pick Six wager beginning on Race 6, which is scheduled to go off at approximately 4:30 p.m.

JOE BRAVO (Edgeway, winner) – “She was feeling real positive from the break right on through. I was in the catbird seat pretty much all the way. At the three-eighths (pole) I just cut her loose and she got real brave then. She’s a nice filly and good horses make my job easier. It’ll be interesting to see what John (trainer Sadler) does with her next.”

JOHN SADLER (Edgeway, winner) – “This has been such a good race for me and it is fun to win it again; it has been a few years in between wins. This is a good filly, she has a great record. The only bad race was her last one and Gamine (who left Edgeway 11 ¼ lengths behind in the Great Lady M at Los Alamitos) is the best in the country. She came back from it today, so I’m very happy.”

The stakes win was the third of the meet for rider Bravo, but his first in the Rancho Bernardo. He now has five stakes wins at Del Mar.

The stakes win was the first of the meet for trainer Sadler, but sixth in the Rancho Bernardo. He now has 79 stakes wins at Del Mar, second most of all trainers.

The winning owners, Hronis Racing, are Kosta and Pete Hronis of Delano, CA.