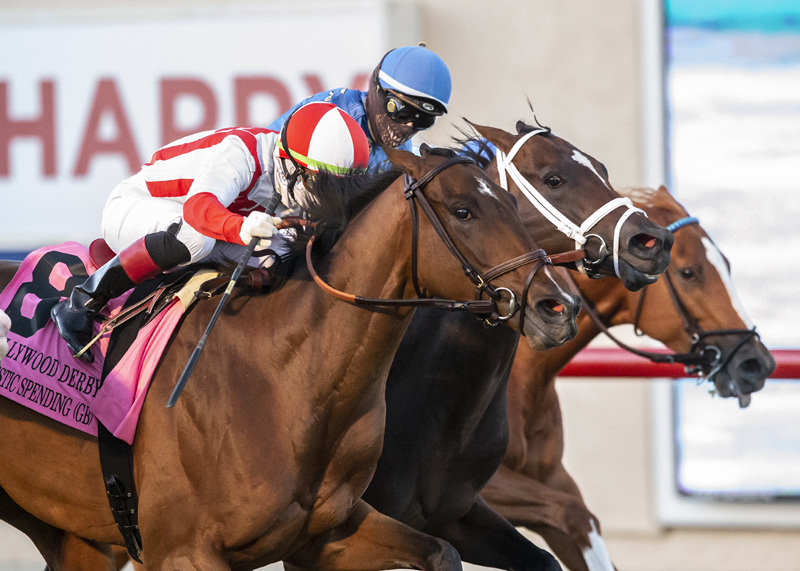 For the third time this weekend at Del Mar, jockey Irad Ortiz, Jr. and trainer Chad Brown teamed up to snare a stakes race. This time it was the Grade I, $303,000 Hollywood Derby with the colt Domestic Spending in a furious blanket finish at the conclusion of the nine-furlong grass test that was the headliner on a sparkling three-stakes card.

Domestic Spending, owned by Klaravich Stables and a British-bred son of Kingman, was up in the final jump to score by a head over Cannon Thoroughbreds’ Smooth Like Straight, who had a neck on Otter Bend Stables’ fast-closing Gufo. Another half-length back was Mary Abeel Sullivan Revocable Trust’s Get Smokin, who had cut out all the pace in the race. Final time for the mile and one-eighth was 1:47.15.

Earlier in the day Ortiz, Jr. and Brown captured the Grade III Jimmy Durante Stakes with Fluffy Socks. On Thanksgiving Day they teamed up to take down the Grade III Red Carpet Handicap. Brown had shipped in eight runners from the East Coast for the big weekend of turf stakes at Del Mar. He has three horses entered in Sunday’s Grade I Matriarch Stakes for older fillies and mares.

Domestic Spending picked up a check for $180,000 for his efforts and improved his bankroll to $520,900. He now has four wins in five starts, the last three in stakes.

The Saturday card also saw the 5-year-old gelding make his West Coast debut a winner as he captured the Grade II Seabiscuit Handicap.

Del Mar had a husky handle of $15,855,052 on the day’s nine races. It’s wagering numbers for the Bing Crosby Season are currently up more than 25% over last season’s marks.

The final day of the season unfolds tomorrow with a 10-race card featuring the Matriarch and the Grade III Cecil B. DeMille Stakes for 2-year-olds. First post moves up a half hour to noon for the finale.

IRAD ORTIZ, JR. (Domestic Spending, winner) – “I thought I was going to be closer with him but he came out of there a little slow and we were in the back. I worked my way up on the backside and he was running perfect. When I asked him for his run at the three eighths (pole), he was ready. He really put in a nice kick. He’s been a little green in his earlier races but he’s getting better all the time.”

JOSE HERNANDEZ, assistant to Chad Brown (Domestic Spending, winner) – “Three down, one more to go. (The Brown team has three stakes wins this week at Del Mar and runners in tomorrow’s Grade I Matriarch Stakes.) I talked to Chad coming over to the paddock and he just said stay with the plan. He broke a little slow but he was in good position and at about the half-mile point he started picking it up and by then I knew he was going to be there at the end. He’s a really good horse. ”

The stakes win was the third of the meet for rider Ortiz, Jr., but his first in the Hollywood Derby. He now has four stakes wins at Del Mar.

The stakes win was the third of the meet for trainer Brown and his third in the Hollywood Derby. He now has 11 stakes wins at Del Mar.

The winning owner is Seth Klarman of Boston, MA, who races under the name Klaravich Stables.