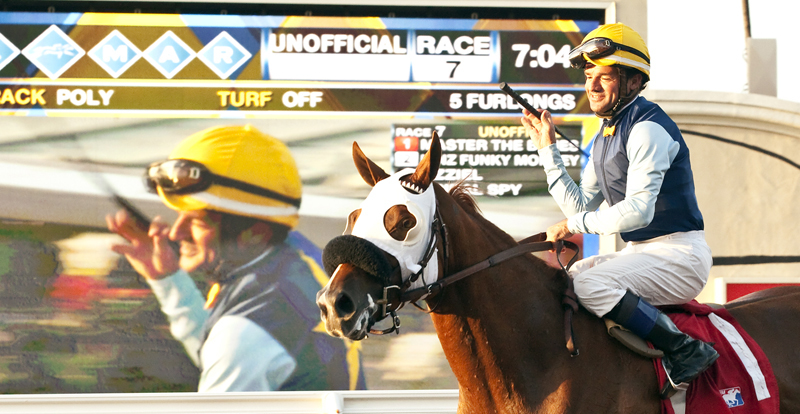 Master the Blues’ victory marked the seventh time Desormeaux and Hess have teamed up to win this summer at Del Mar.

Master the Blues, a five-year-old Kentucky-bred mare by Master Command, engaged the swift Kinz Funky Monkey after the start of the five-furlong dash, dropped back to third on the far turn, then re-rallied under Desormeaux to collar Kinz Funky Monkey nearing the wire.

Third in the five-horse field of older fillies and mares was Uzziel, who was 1 ½ lengths behind the runner-up and 4 ¼ lengths in front of fourth-place Tribal Spy, the 17-10 favorite. Our Pure Creation was fifth and last. Scratched from the line-up was Delta Flower.

The winner is owned by a partnership of Gulliver Racing, LLC; J.K. Houssels, Jr., and Schroeder Farms, LLC.

Elvin Trujillo, competing for the first time at Del Mar, had two winners to move into the top spot in the jockey standings. Through 17 days of the 36-day season, Trujillo has 16 wins, one more than Desormeaux, and two more than defending champion Rafael Bejarano who blanked Friday.

There was a single perfect ticket in the Pick Six Friday and it was worth $100,896.