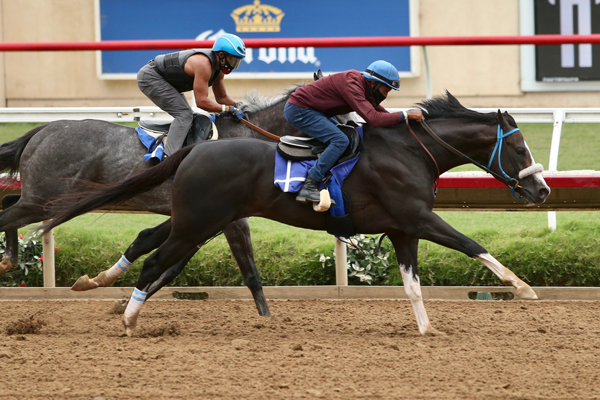 In a season of unusual happenings, Saturday’s Shared Belief Stakes fits right in. The 3-year-old feature – which has drawn six very interesting runners -- breaks new ground in that it is the first time a Kentucky Derby prep race has been conducted at the seaside oval in its 81-year history.

Of course, this is Kentucky Derby 146 upcoming and it’s the first time it has been conducted on the first Saturday of September. That, too, fits right in.

Del Mar’s $100,000 “Derby Prep” is normally a mile race at the end of August. But in anticipation of its new role, it was shifted to the beginning of August and lengthened to a mile and one sixteenth. It will carry Derby “points” of 50-20-10-5 for its first four finishers.

Heading the lineup are a pair of colts with short, but sparkling, resumes in C R K Stable’s Honor A.P. and Pegram, Watson and Weitman’s Uncle Chuck. The former has been hung the 8-5 morning line favorite, while the latter is right behind him at 9-5.

Honor A.P., a ridgling by Honor Code and a grandson of champion and prolific sire A.P. Indy, comes into the race off a tally in the Santa Anita Derby on June 6. He was second in the San Felipe at Santa Anita in his race prior to that and has been training forwardly at Del Mar for his “prep.” Mike Smith, who has handled Honor A.P. in all four of his starts so far, once again has the call Saturday.

Uncle Chuck, a colt by Uncle Mo, has only raced twice, but both times he was especially impressive. He scored by seven lengths in a Maiden Special Weight race at Santa Anita in June in his debut, then came right back on July 4 to handily capture the Los Alamitos Derby at the Orange County track. He, too, has looked good in the mornings in his Del Mar works and gets the saddle services of Drayden Van Dyke for the Shared Belief.

The Shared Belief will be the second of 11 races on the Saturday card, which also features the Grade I, $250 Bing Crosby Stakes and the California Thoroughbred Breeders Association Stakes.

First post on all programs at Del Mar this summer is 2 p.m.