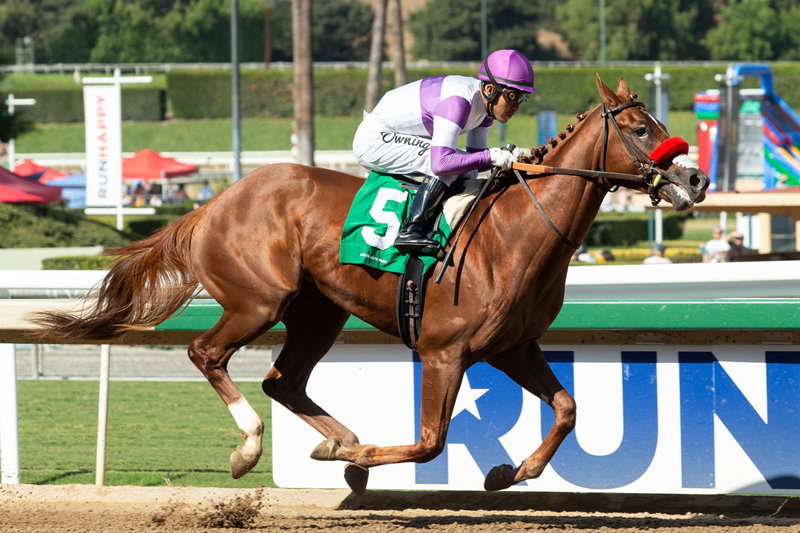 Friday’s main event at Del Mar will be the 35th edition of the Real Good Deal Stakes, a seven-panel spin restricted to California-bred or sired runners who are age 3. It has brought out eight sophs who’ll run for the lion’s share of the $175,000 purse.

The horse to beat in the lineup is Reddam Racing’s homebred Slow Down Andy, a son of the farm’s Kentucky Derby winner Nyquist, who now stands at Jonabell Farm in Lexington, KY. The chestnut “Andy” shows a trio of wins and a pair of seconds from six starts so far, including tallies in the Los Alamitos Futurity and the Sunland Derby. He’ll break from Post 2 Friday with the only rider he’s known again in the boot, Mario Gutierrez. Doug O’Neill, who saddled Nyquist to win the 2016 Kentucky Derby, trains Slow Down Andy.

Chief treat to the top one appears to be William Peeples’ Big City Lights, a colt by the California stallion Mr. Big who has won his only two starts in impressive fashion. The quick dark bay or brown runner proved best in the Fasig Tipton Futurity at Santa Anita in his second start on June 20, drawing off to score by more than seven lengths.

Regular ride Juan Hernandez, who is currently Del Mar’ leading rider, has the call on “Lights” Friday and they’ll go forward from the No. 8 outside post. The colt is now being trained by Hall of Fame conditioner Richard Mandella after capturing his first two starts for trainer Luis Mendez.

Here’s the full field for the Read Good Deal from the rail out with riders and morning line odds:

The Real Good Deal, named after a top California-bred racehorse out of the 1960s, will go as Race 6 on the eight-race Friday bill. Post time for the stakes is approximately 6:30 p.m. First post on Friday is 4 p.m.