Del Mar Wagering Menu has 17 Different Ways to "Get Down" 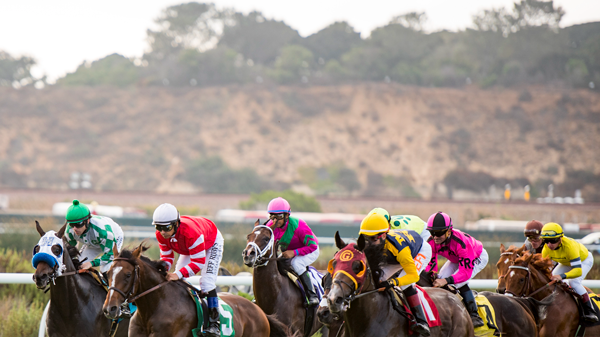 Del Mar’s 2020 betting menu will offer 17 different ways for racing fans to back their favorites at the seaside oval as it presents its 81st racing season between July 10 and September 7.

Though current plans call for the track to race without fans in the stands, the many satellite and online opportunities to wager and follow the action are expected to provide handle results similar to – and possibly even better than – past years. In 2019, 90% of Del Mar’s betting took place away from the racetrack.

The track’s bet roster starts with the traditional win, place and show wagers and expands all the way out to several five- and six-horse combinations.

Three relatively new multi-race bets that have proven well-liked by the track’s punters are again on tap this summer. They are the early Pick Four, beginning on Race 2 at a .50¢ price; a late Pick 5 offered on the last five races daily, also at the .50¢ level, and a Win, Place, Show Parlay available for a minimum of two races and a maximum of six. It is a $2 bet.

In addition to its Early Pick Four, the track will continue to offer its usual Pick Four on the last four races on the day’s card, a bet that has proven to be one of the most popular in the country and regularly registers $1-million-plus pools on weekends. Further, the late Pick Five will be similar to the track’s early Pick Five held on the day’s initial five events. And the Win, Place, Show Parlay will be presented using the standard single-bet W-P-S takeout of 15.43% instead of a multi-bet takeout that goes above 20%.

Del Mar also will continue with its longstanding $2 Pick Six on all racing days, along with the “Single Ticket Jackpot” addition to it that the track introduced during its 2016 fall season. Under the “Jackpot” rules, a separate pool accumulates alongside the regular one if nobody hits the bet as a lone ticket holder. This allows for a large separate pool to grow even in the case of a “hit’ on the Pick Six by two or more players. The “Jackpot” pool often reaches six figures in fairly rapid order and can be expected to do so throughout the stand.

And, as it has the past several summers, Del Mar will schedule two “mandatory payouts” on the “Jackpot” pool:  first on TVG Pacific Classic Day (Saturday, August 22), then on Closing Day, Monday, September 7. That means that a Pick Six winner on either of those dates would share not only in the regular pool, but the full “Jackpot” pool besides. Additionally, consolation winners on those days also would share in the “Jackpot” payout.

“Seeing what has happened at other tracks that have raced without fans because of the COVID-19 situation is giving us encouragement,” said Del Mar’s director of mutuels Bill Navarro. “Across the board nationally betting has been strong. Wagering is the lifeblood of our sport and we believe we can - and will - have a good summer in that regard at Del Mar.”

Del Mar will race on a Friday – Saturday – Sunday schedule throughout the summer, ending on its traditional closing day, Labor Day Monday, September 7. First post daily throughout the session will be 2 p.m.