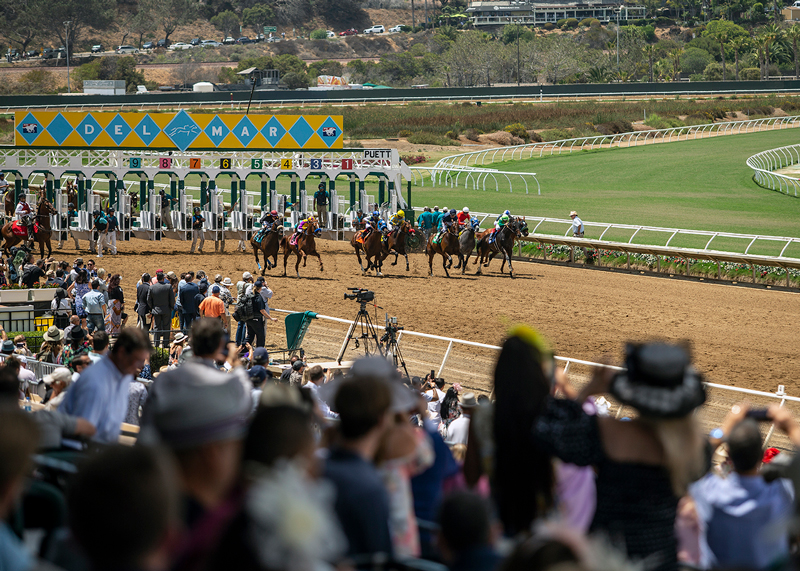 Spurred by strong support from horsemen and women from California and around the country, Del Mar set new records for average daily handle and field size during its 83rd summer season that concluded Sunday, September 11.

The track also continued its exemplary safety record for the fourth consecutive year. Del Mar reported no catastrophic injuries among its 2,688 starters in its 294 races during the 31-day season.

Fueled by record California purses of over $800,000 per day, field size during the summer meet averaged 9.77 for turf races and 8.67 for main track events. Together they combined for a Del Mar record 9.14 horses per contest, well above last year’s average of 8.45. The 9.14 mark puts the seaside track at the very pinnacle of all tracks in the country and has served as a great lure for horse players nationwide.

The highlight of the meeting was Flightline's tour de force performance in the TVG Pacific Classic when the undefeated 4-year-old dominated the $1 million race, the track's signature event, by nearly 20 lengths in an awe-inspiring display that led to a standing ovation by the fans on hand and accolades from the racing community throughout the country. Owned by Hronis Racing and partners, trained by John Sadler and ridden by Flavien Prat, Flightline is expected to make his next start in the rich Breeders' Cup Classic at Keeneland in November.

“Just an incredible meet on all levels,” said Joe Harper, Del Mar’s Chief Executive Officer. “All season long the racing was ultra-competitive and extremely safe. Our racing office, led by Tom Robbins and David Jerkens, was phenomenal. We’re also very appreciative of the support we received from our fans and our players both here on track and all across the country.”

Seventy different trainers recorded wins at the summer meet, further evidence of how competitive the racing was this season.

The track’s innovative “Ship & Win” program had its best season yet with 222 new runners shipping in to race at the shore oval, well ahead of last year’s record 186 imports. The majority of those horses, which are primarily owned and trained by California stables, will compete at Los Alamitos, Santa Anita and Golden Gate, boosting field size throughout the state.

Del Mar’s jockey championship was a runaway with last fall’s leading rider, Juan Hernandez, picking it right back up and proving he belongs with the best of the best. The versatile 30-year-old captured a total of 49 races at the session, a full 22 winners ahead of runner-up Umberto Rispoli. The leading trainer title was a battle down to the very last day and it saw Hall of Famer Bob Baffert tie Phil D’Amato, each with 19 firsts. This was Baffert’s eighth training title, but his first since 2003. It was D’Amato’s fourth, counting his score in last fall’s Bing Crosby meet. The stand’s top owners were the trio of Mike Pegram, Karl Watson and Paul Weitman, who won nine races at the meet (including closing day’s Grade I Runhappy Del Mar Futurity) and a total of $849,680 in purses.

“This meet is the culmination of a year-long plan to revitalize California racing and return it to its rightful place as one of the best circuits in America,” said Thoroughbred Owners of California chairman Gary Fenton. “A big thank you to our partners at DMTC and our members. Without owners there is no California racing and they continue to make a strong statement that Del Mar is their favorite place to be.”

Racing returns to Del Mar for the track's fall Bing Crosby meet from November 11 through December 4.