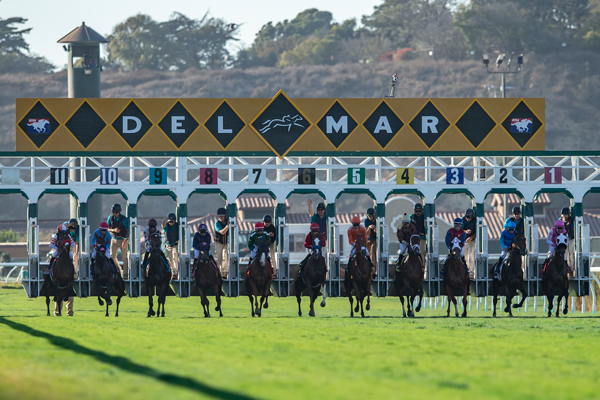 Del Mar’s eighth fall meeting – starting on Wednesday, November 3 – will offer horsemen/women a solid 20% blended raise in overnight purses compared to last year, as well as a continuation of the exceptionally popular ‘Ship & Win’ program that has amplified field size and year-round horse population at the track and in the state.

The 15-day stand, which will run through Sunday, November 28, includes the 38th edition of the Breeders’ Cup World Championships on Friday, November 5 and Saturday, November 6. The meet is entitled the “Bing Crosby Season” as a salute to the track’s founder.

The 20% across-the-board increase in fall overnight purses means that Del Mar is presenting its fall schedule under the same robust levels as its highly successful summer session that ended on Labor Day. And the restarting of its ‘Ship & Win’ program – with a $3,000 guarantee for a first outing along with a 30% purse boost in all starts – builds on the program’s blockbuster summer numbers that were the best in its 11-year history.

“Our summer meet was extraordinary on all fronts,” said track vice president and racing secretary David Jerkens. “Our racing was just about the best we’ve ever seen here and our ‘Ship & Win’ program continues to give Del Mar – and California racing – a tremendous boost.”

Among the all-inclusive increases in purse values during the upcoming four-week session will be the following:

Del Mar’s ‘Ship & Win’ strategy saw 180 new horses make 272 starts during its 31-day summer meeting. That upped the totals since the plan’s start in 2011 to more than 1,600 runners appearing at Del Mar and making over 2,200 starts. Those same horses made more than 4,500 starts at other state track’s during that time, primarily at Santa Anita, Los Alamitos and Golden Gate Fields.

The ‘S & W’ program will continue its positive arrangement with is sister track Santa Anita, which began on a full-time basis this past summer. Eligible horses from out-of-state who start once at the upcoming Santa Anita fall session still will be eligible for 30% purse bonus. Besides the track’s 180 direct ‘S & W’ summer runners, there also were 43 Santa Anita starters who then came to Del Mar to compete this past summer and took advantage of the ‘S & W’ arrangement.

The simple rules for ‘S & W’ runners are as follows:

Those who have questions concerning the program are encouraged to contact Del Mar’s executive vice president for racing Tom Robbins or Jerkens at (858) 792-4230.

“We couldn’t be more thrilled with our partners at Del Mar who once again are offering our owners the biggest purses to run for,” said Thoroughbred Owners of California chairman Gary Fenton. “This coupled with its signature ‘Ship & Win’ program – which has greatly influenced the Southern California horse population – make us excited to head back south again in November.”