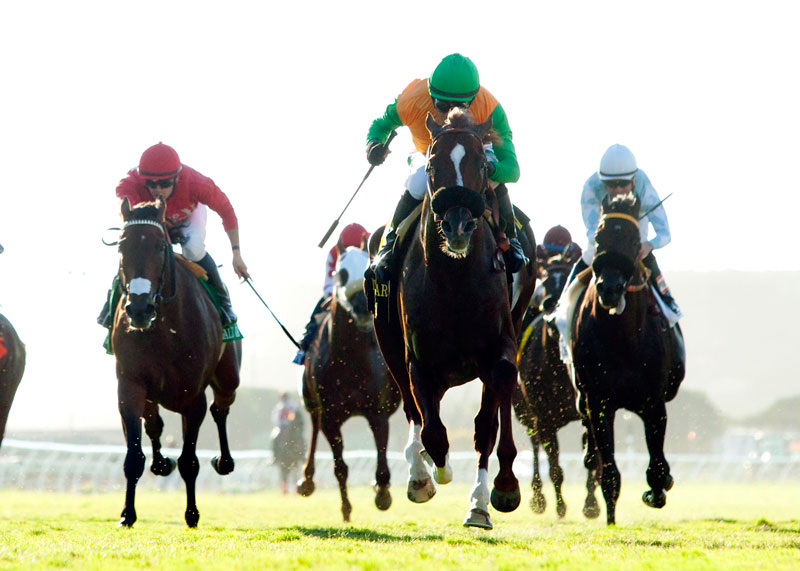 GARY STEVENS (Om, winner) – “I’m so pleased; this was special. I’m just glad Danny (trainer Dan Hendricks) gave me a shot and put me up on him.  I worked him three weeks ago (Aug 20) and he went great without any blinkers. Then two weeks ago (Aug 27) I worked him again and they said blinkers on. I asked why? They said he runs in blinkers. I worked him and told them I didn’t like him in blinkers at all; that he got too aggressive with it. Then last Wednesday I’m going to work him and he runs off on the pony. We had to abort the work and I just two-minute licked him. I told Danny to just work him the next day (Sept 3) with Cisco (assistant trainer Francisco Alvarado) and he went easy for him. And here he runs huge today (with blinkers off). As you can see, it is a very inexact science. But he’s a nice horse and I’m so glad for Danny,”
FLAVIEN PRAT (Royal Albert Hall, second) – “He tries hard every time. I love to ride his kind.”
KENT DESORMEAUX (Prospect Park, third) – “He was right where we wanted to be. He was just cantering. Then I asked him and he just kept cantering. No response. No response at all.”
DAN HENDRICKS (Om, winner) – “We pointed for this. It’s just good when everything pays off. You do your due diligence and the harder you work the luckier you get. He’s what I would call a really old-school horse. He’s just a coarse, tough, good feeling horse and it worked out just the way we’d talked about for two weeks. I’ve won just about every Derby in Southern California – Santa Anita, Hollywood, Oak Tree and now this one. This was my dream to win this race and it really means a lot to me. As much as my Santa Anita Derby.”
FRACTIONS:  :23.58  :47.71  1:11.86  1:35.76  1:47.79
The stakes win was the sixth of the meet for rider Stevens (the most by any rider at the session) and his third in the Del Mar Derby.  He now has 88 stakes wins at Del Mar, seventh most of all riders.
The stakes win was the first of the meet for trainer Hendricks and his first in the Del Mar Derby. He now has 14 stakes wins at Del Mar.
The winner is owned by the Sareen Family Trust from Las Vegas, NV.