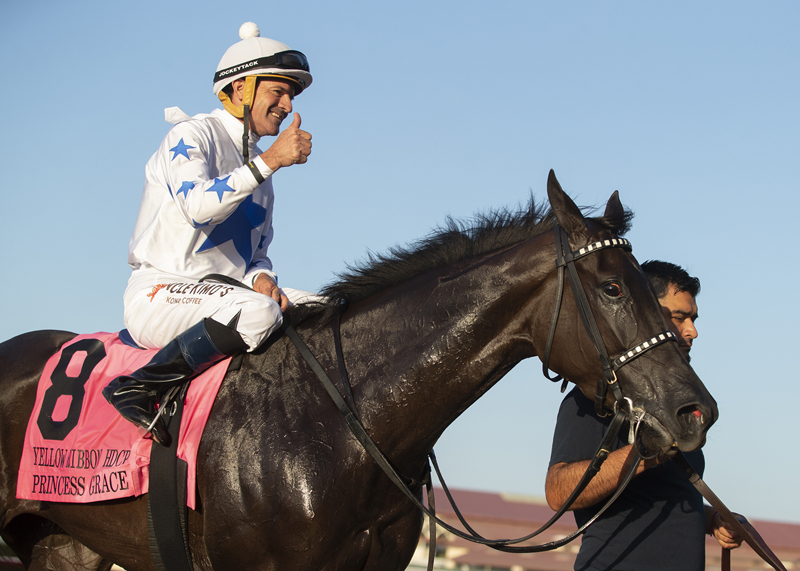 Del Mar’s Bing Crosby Season #8 will come to a sweet close Sunday with a nine-race card topped by the Grade I, $400,000 Matriarch Stakes.

Besides the filly and mare grass feature, there also will be the Grade III, $100,000 Cecil B. DeMille Stakes for 2-year-olds. The Matriarch has lured seven for its mile journey, while the DeMille has brought out 11 for its eight furlongs on the green.

The 15-day Crosby Season featured the 38th edition of the Breeders’ Cup World Championships, which established a new betting mark for the two-day, 14-race extravaganza. Additionally, the seaside track put on its own 13-day session climaxed by a seven-stakes, all on grass, four-day finish that puts a fine bow on a fine racing run.

Heading the 41st edition of the Matriarch – the last seven of which have been held at Del Mar – is Susan and John Moore’s Princess Grace, a 4-year-old filly by the Japanese stallion Karakontie who has won six of her eight lifetime starts, including a tally at Del Mar this past summer in the Grade II Yellow Ribbon Handicap. Trainer Michael Stidham sticks with Kent Desormeaux as her rider.

Princess Grace will have to have her running shoes on tight Sunday, though, with trainer Chad Brown having entered two of his mares in the test, including last year’s winner Viadera.

The Matriarch will be 7th Race on the Sunday card.

In the Cecil B. DeMille, which goes as Race 3, the horse to beat appears to be another Brown runner in Verbal, who has only made one starts, but it was a goodie. He won easily over a field of straight maidens at Belmont Park on October 10 at a mile on the grass and will have Jose Ortiz back again on board on Sunday.

Here are the full fields for both races from the rail out with riders and morning line odds: