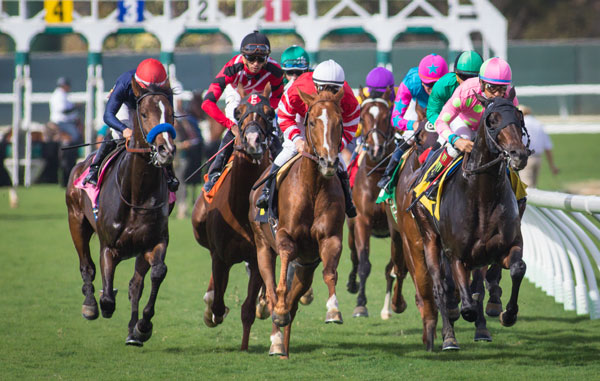 With inclement weather predicted to bring substantial rain on Wednesday and Thursday of the coming week, Del Mar Thoroughbred Club proactively cancelled its scheduled Thanksgiving Day race card as part of its continuing emphasis on horse and rider safety.

Track officials plan to shift several of the races from Thursday’s program – including the $100,000, Grade III Red Carpet Stakes – to expanded race cards on Saturday, November 30 and Sunday, December 1.

Additionally, the track is intending to run its Friday program as scheduled, but offering races only on its main track that day. Friday’s scheduled feature race, the $200,000, Grade II Hollywood Turf Cup, will be run on Sunday.

“The Weatherman is making it tough, but safety always comes first,” said Del Mar’s executive vice president for racing Tom Robbins. “We are appreciative of the cooperation from our horsemen. We’re planning on putting on a good show Friday and following that with tremendous stakes-filled cards on both Saturday and Sunday. We’ve got horses and horsemen coming into town from back east for our big races and we want them to know that their races will be presented as planned under safe and proper conditions.”

Del Mar worked with industry stakeholders – notably the Thoroughbred Owners of California – and its regulator, the California Horse Racing Board, in reshaping the conclusion of its fall racing season.

In the revised weekend slate, the track will move up first post both Saturday and Sunday to 12 noon and run 10 races on each day. Grass racing will be emphasized and there will be seven graded turf races conducted over the two days offering $1.3 million in purses.

Though Del Mar’s planned Thanksgiving race card will not happen, the facility will be open for Thanksgiving Brunch – featuring turkey and all the trimmings – from 11 a.m. to 2:30 p.m. In addition, simulcast wagering will be presented along with traditional NFL action. Wagering will be held in its usual spot in the Mission Tower building starting at 9 a.m. and going forward to approximately 2:30 p.m., with races at Golden Gate Fields along with tracks from across the country on the agenda.