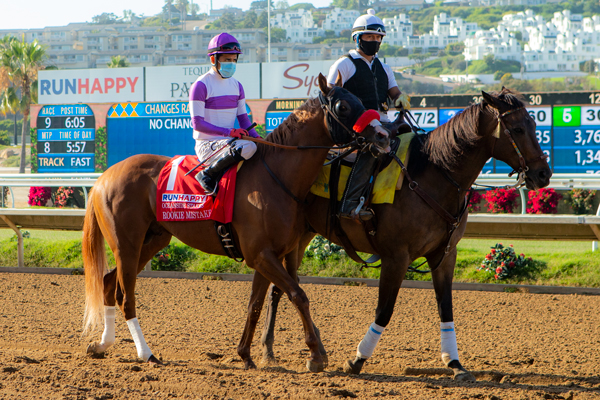 Del Mar returns to racing Friday will an 11-race card highlighted by the 33rd edition of the $125,000 Real Good Deal Stakes, a seven-panel spin for California-bred 3-year-olds. The race drew seven runners.

Favoritism in the dash is likely to fall to one of two sophs – Reddam Racing’s homebred Rookie Mistake or Slam Dunk Racing or Nentwig’s El Tigre Terrible.

Rookie Mistake gets regular rider Mario Gutierrez and a spot in the No. 1 hole. El Tigre Terrible will be handled by Flavien Prat as they come out of post No. 4.

Rookie Mistake, who trains out of the barn of Doug O’Neill, will be making the 11th start of his young career, the most of any runner in the field. The colt by Square Eddie has two wins, two seconds and two thirds on his ledger for earnings of $139,098. One of those seconds was in the Echo Eddie Stakes at Santa Anita in May when he lost in a photo to Big Sweep, a filly who beat her own kind here at Del Mar on July 12 in the Osunitas Stakes.

El Tigre Terrible does his training with Del Mar’s leading conditioner at the current meet, Peter Miller. The gelded son of Smiling Tiger has three wins in seven starts and a bankroll that reads $139,260. He, too, was second in a stakes at Santa Anita, this one being the Desert Code on June 6 where he lost be half a length to the filly She’s So Special.

Margot’s Boy shortens up and switches to dirt from turf, the surface he’d run all of his six total starts on previously. The Clubhouse Ride gelding has speed and could be a forward factor in the Real Good Deal.