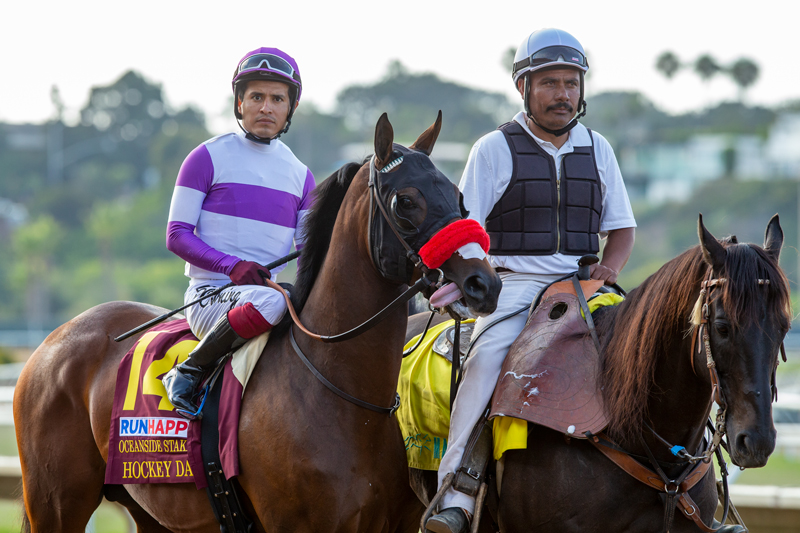 The featured attraction on this Thursday’s card is a one-mile turf allowance race for 3-year-olds that has drawn 13 runner, though only nine of them will be able to go postward with the rail out at its maximum extension of 30 feet, making for a snug fit on the seven-eighths oval. It will go as the eighth and last race on the day’s card.

But the co-feature of the afternoon no doubt will be those racing fans trying to take down the track’s Pick Six Single Ticket Jackpot Wager which, after going unsolved for 12 straight days, will offer Thursday racegoers a chance to take down a prize of $1,127,460. The bet will be conducted on Races 3 through 8. So with first post set for 2 p.m., the Pick Six opener will go at approximately 3 p.m.

Two colts who finished second and fourth in the opening day Oceanside Stakes appear likely to draw the most attention in the $72,000 Thursday headliner. They would be Hronis Racing’s Crew Dragon and Reddam Racing’s Hockey Dad.

The former, a son of Exaggerator, came running late in the one-mile Oceanside and just missed by a head. It was the chestnut’s first start for his new connections, which includes trainer John Sadler. He’d been racing in the east previously where he’d put together a win, a second and four thirds in six outings. Umberto Rispoli rode him in the Oceanside and he’ll be back up on Thursday.

Hockey Dad showed a good turn of foot in the Oceanside, leading the race for the start to deep stretch where he gave way late and finished fourth, though only a half-length off the winner. Hockey Dad, a California homebred by Nyquist, has three wins in seven lifetime starts. Regular rider Mario Gutierrez will be back up once again Thursday.

Here’s the full field for the feature from the rail out with riders:

There are also four also-eligibles in the lineup who’ll need a withdrawal from the main body of the race in order to run. They are: