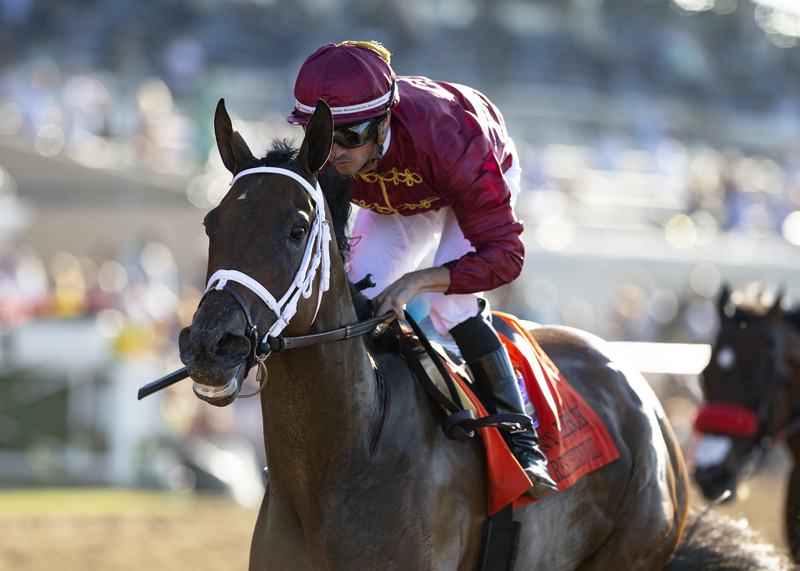 A sparkling field of seven fillies and mares – topped by the multi-millionaire and defending champ in the headliner, Shedaresthedevil -- will compete for a $400,000 prize and Grade I status Saturday at Del Mar in the 52nd edition of the Clement L. Hirsch Stakes, a mile and one-sixteenth crucible that will go as Race 9 on the day’s 11-race card.

The Hirsch, which is run on the main track, will be followed by the $150,000 California Dreamin’ Stakes, also at a mile and one-sixteenth, but this one held on the turf course and limited to California-bred or sired runners aged 3 and up. Part II of the stakes doubleheader has lured a field of 11 runners along with two also-eligibles.

Besides its money and prestige attraction, the Hirsch is also a “Win and You’re In” Breeders’ Cup race that gives the winner an automatic entrée, with all fees paid, into the $2 million Longines Breeders’ Cup Distaff, which will be run at Keeneland in Kentucky this November.

Shedaresthedevil currently sports a bankroll that reads $2,729,458, which goes a long way in telling the tale of an exceptional racemare. The 5-year-old daughter of Daredevil, owned by Flurry Racing Stables and partners, has won 10 of her 20 starts, including nine Graded stakes, among them last year’s Hirsch in which she scored smartly by more than three lengths. She’ll be ridden Saturday by her regular guy, Florent Geroux, who has set up shop this summer at Del Mar. The mare was shipped from Kentucky Wednesday for the race by trainer Brad Cox.

Chief threat to the top one appears to be the double-quick filly Private Mission, who can be expected to set the pace in the Hirsch. Owned by the Baoma Corporation and trained by Bob Baffert, Private Mission currently shows $397,300 in earnings and comes into the race off a good tally in the Santa Maria Stakes at Santa Anita on June 18. She’ll be ridden by Del Mar’s leading rider, Juan Hernandez.

The California Dreamin’ is a wide-open affair with a possible favorite in the 4-year-old gelding The Chosen Vron, a son of Vronsky who has won five of his seven career starts. The chestnut hasn’t started since a score at Turf Paradise in Arizona last November but has been training well for trainer Eric Kruljac and will have the saddle services of top turf rider Umberto Rispoli.

The Clement L. Hirsch, named after an exceptional California horseman and one of the founders of the Del Mar Thoroughbred Club, had its purse boosted this year from $300,000 to $400,000. Among previous winners of the race are champions like Beholder, Zenyatta (three times), Azeri, Tranquility Lake, Paseana and Bayakoa.

Here’s the full field for the Hirsch from the rail out with riders and morning line odds:

Here’s the full field for the California Dreamin’ from the rail out with riders and morning line odds:

First post for Saturday’s card is 2 p.m. The Hirsch has a post time of approximately 6:05 p.m. and the California Dreamin’ is scheduled to go off at approximately 6:35 p.m.