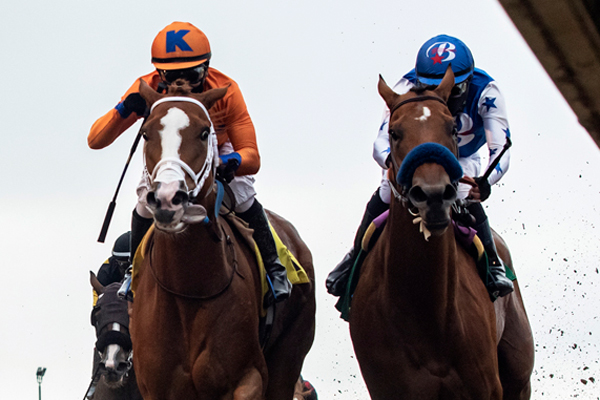 The 4-year-old fillies Proud Emma and Message hooked up in a furious stretch battle inside the eighth pole and ding-donged all the way home. In the end, the camera could not separate the hard-trying pair and they called it even – the first dead-head for the win at the Del Mar summer session happening in Friday’s Tranquility Lake Stakes.

Proud Emma, ridden by Mike Smith and trained by Peter Miller, was outside and Message, ridden by Flavien Prat and trained by Bob Baffert, was inside. At the wire Proud Emma appeared to be a tad in front, but Message lunged late and tied things up. It was a real horse race.

Proud Emma is owned by John Waken of Arcadia, CA who races under the name Gem, as well as Kagel, who is Tom Kagel of LaVerne, CA. Message runs under the colors of the Baoma Corp, which is Charles Chu of N. Andover, MA.

Finishing third in the mile race run in 1:37.27 was Seltzer Thoroughbreds Hang a Star.

The stakes win was the 11th of the meet for rider Prat and his 36th overall win of the session, tying him with Umberto Rispoli for top jockey at the stand. The victory was the third of the day for trainer Miller, improving his lead in the trainer standings to 21 to 14 over second-place Phil D’Amato. Trainer Baffert was winning his fifth stakes of the meet and his Del Mar leading 138th. Amazingly, the veteran horsemen, who has won hundreds and hundreds of stakes, said this was his first time he has been involved in one that ended in a dead-heat. Rider Smith was winning his 71st Del Mar stakes.

The last time there was a dead-heat in a stakes race at Del Mar was in the Rancho Bernardo Handicap in 1973 when Dollar Discount and D.B. Carm finished on even terms in the second division of the filly/mare sprint stakes.

In the day’s Pick Six, a carryover materialized when a stunning $133.80 winner – Quiet Secretary – held on to capture the day’s 9th and final race under rider Ruben Fuentes. The largest win payout of the meet resulted in a $247,091 carryover, along with a $52,948 Jackpot carryover to go with it.

FLAVIEN PRAT (Message, DH-winner) – “She put us in the race today; she was really digging in late. I couldn’t tell if I’d won or not. I thought maybe. First time I’ve ever been in a dead-heat in a stakes race.”

MIKE SMITH (Proud Emma, DH-winner) – “I was concerned about the quick turnaround (she had raced 12 days ago). I thought I was going to have to go catch that other one (Message), but we wound up hooking up early. I couldn’t hit my filly. She was getting in (he was just outside Message) and I couldn’t go left-handed, we were too close. And if I hit her right-handed, she might come over more. I knew I was in front right before the wire, but then he (Prat) got the bob. My filly’s head was coming back up and his was going down. It worked out OK.”

BOB BAFFERT (Message, DH-winner) – “First time I’ve ever dead-heated in a stakes. I couldn’t tell who won. I was willing to split it.”

PETER MILLER (Proud Emma, DH-winner) – “I was really upset (when the race ended). It looked like Mike (Smith) was just waving the stick and wasn’t getting after it. But he said to watch the head-on shot and they were so close together and even bumping a little bit that he couldn’t do anything. I’m very happy to get the dead-heat.”

The stakes win the 11th of the meet for rider Prat. He now has 55 stakes wins at Del Mar.

The stakes win was the first of the meet for rider Smith. He now has 71 stakes wins at Del Mar, 10th best of all time.

The stakes win was the fifth of the meet for trainer Baffert. He now has 138 sakes wins at Del Mar, the most by any trainer.

The stakes win was the fourth of the meet for trainer Miller. He now has 33 stakes wins at Del Mar.

Message is owned by Baoma Corp, which is Charles Chu of North Andover, MA.