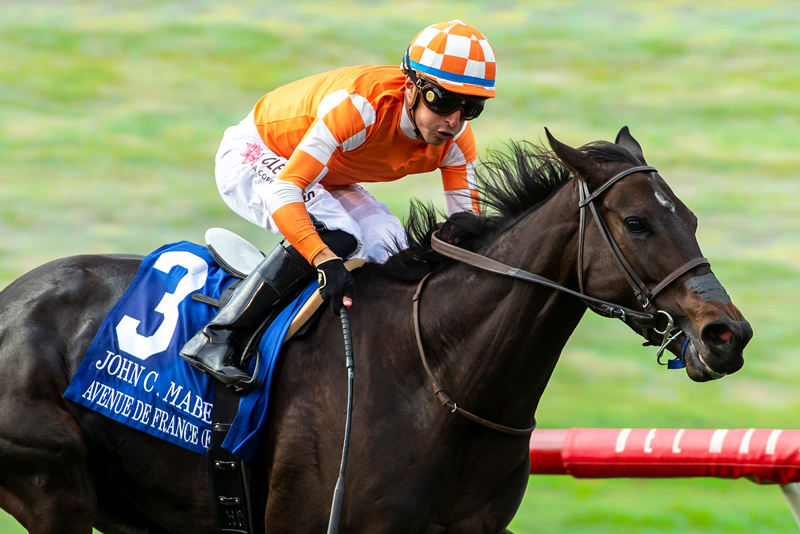 Leading rider Juan Hernandez took a gamble on the backside with his mare Avenue de France and he cashed it in at the wire when they held on by half a length over the charging 1/2 race favorite Going Global in Saturday’s $251,000 John C. Mabee Stakes at Del Mar.

Hernandez’s bold jump proved just what his daughter of Cityscape needed to capture the Grade II stakes and pick up a check for $150,000 to increase her earnings to $525,066.  It was her eighth career victory in her 22 start. The French-bred turf specialist is trained by Frenchman Leonard Powell and she covered the nine furlongs on the Jimmy Durante Turf Course in 1:47.96.

Going Global, who races for Dub, Gevertz or Nentwig, et al, had two and a half lengths on third-place finisher Going to Vegas, who goes for Abbondanza Racing and Medallion Racing.

The race was part of the Pick Six sequence at Del Mar, which was not hit again causing a carryover of $166,281 into Sunday’s final card of the season. There is a mandatory payout on the wager tomorrow, which will be held on races six to 11. First post for the finale is 1 p.m.

JUAN HERNANDEZ (Avenue de France, winner)-- “This filly always moves the last quarter of the race, but today I took my chance and went around at the half mile. She was pulling and it looked like she wanted room, so I saw the opportunity to go around and make my move a little early today. Nothing caught us at the three-eighths (pole) and I took my chance. If I was going to get caught, I would have gotten caught at the wire. Good thing my filly held on through that move and won.”

LEONARD POWELL (Avenue de France, winner) – “She’s on her game. She’s got a very good turn of foot. She caught Going Global flat footed at the three-eighths and when Going Global came at her she re-rallied. I thought he (Juan Hernandez) had moved too early, honestly, but it turned out to be the winning move. That’s why Juan is at the top of the ladder right now.”

The stakes win was the 11th of the meet for rider Hernandez, but his first in the John C. Mabee Stakes. He now has 26 stakes wins at Del Mar.

The stakes win was the second of the meet for trainer Powell, but his first in the John C. Mabee Stakes. He now has eight stakes wins at Del Mar.