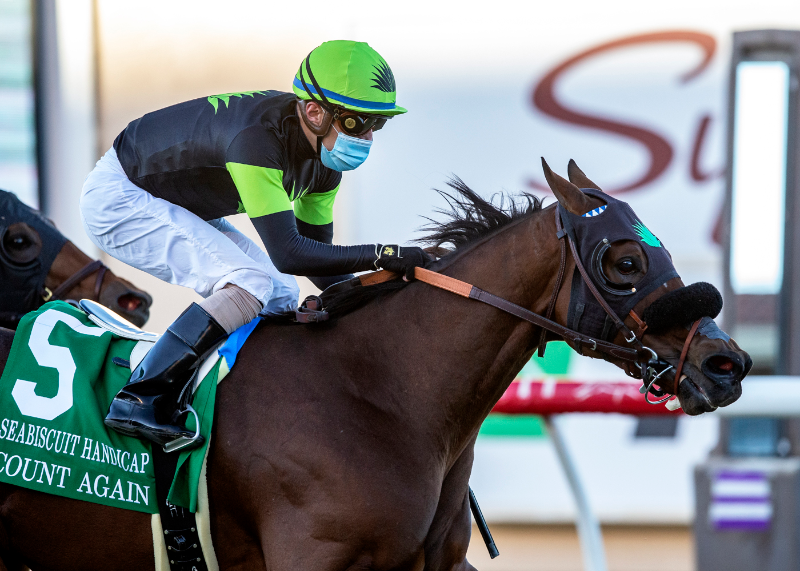 Agave Racing Stable or Sam-Son Farm’s Count Again trailed early, but came roaring through the lane to take down honors in the $203,500 Seabiscuit Handicap Saturday at Del Mar. He ran the mile and one-sixteenth on turf in 1:40.84 to establish a stakes record.

Juan Hernandez gave the 5-year-old Awesome Again gelding a well-timed ride that saw him get home by three-quarters of a length in the Grade II feature for 3-year-olds and up. Phil D’Amato trains the bay who was making his California debut after racing in Canada earlier this year.

Finishing second in the Seabiscuit was Juddmont Farms’ favored Flavius and running third was Ivarone, McClanahan or Peskoff, et al’s Next Shares.

Co-owner Sam-Son Farm’s of Ontario, Canada, is also the breeder of the winner.

Count Again registered his fourth win in his eighth career start and pick up $120,000 as the winner’s share of the purse. He now has career earnings of $271,165.

JUAN HERNANDEZ (Count Again, winner) – “He’d been running longer races (10 and 12 furlongs) and when he broke a little slow today I didn’t rush him. We were in a good spot on the backside and I could feel I had plenty of horse. When we hit the three-eighths (pole) I wheeled him outside and we started to pick them up. He ran hard through the stretch and we got it done.”

PHIL D’AMATO (Count Again, winner) – “(Previous trainer) Gail Cox delivered this horse to me in excellent condition and I was really glad to have him. She got him going really good and his confidence up as well and I just kind of trained on from that. I’m just fortunate to have him. Juan (jockey Hernandez) followed our plan. I just told him to save all the ground and come with one run. If the race sets up for us, great, if not we’ll stretch him out next time. He followed those instructions to a ‘T’ and he came with a monstrous run. ”

The final time is a stakes record for the race. The previous record was 1:41.03 accomplished by Hunt in 2017.

The stakes win was the second of the meet for rider Hernandez, but his first in the Seabiscuit. He now has six stakes wins at Del Mar.

The stakes win was the first of the meet for trainer D’Amato, but his third in the Seabiscuit. He now has 29 stakes wins at Del Mar.

The winning owners are Mark Martinez of San Antonio, TX, who races under the name Agave Racing Stable and Canada’s Sam-Son Farm of Rik Balaz. Sam-Son is also the breeder.