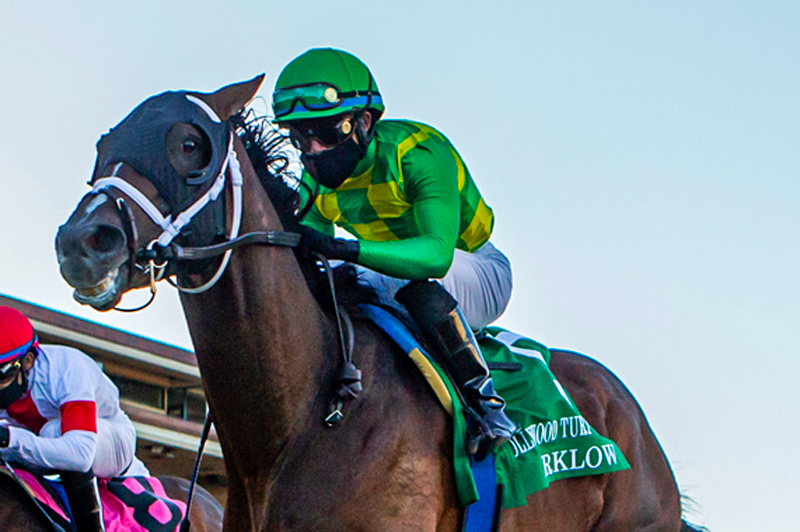 The class of the field ran like it Friday at Del Mar as Arklow tracked close to the leaders in the 12-furlong Hollywood Turf Cup, then got the jump on his chief rivals turning for home and went on to an impressive half-length score in the $203,500, Grade II headliner.

The 6-year-old entire horse by Kentucky sire Arch covered the mile and one-half distance on the Jimmy Durante Turf Course in 2:26.31, which established a stakes record and just missed the course record for the distance by .12 hundredths of a second.

Joel Rosario rode the veteran for the first time for trainer Brad Cox and put in a masterful bit on horsemanship on the long-winded bay. Arklow earned a first prize of $120,000 and now sports a sparkling racing record of 31 8-7-2 for $2,666,116 in earnings. The horse races for the partnership of Donegal Racing, Joseph Bulger and the Estate of Peter Coneway.

Finishing second in the seventh local edition of the marathon was Manfred Ostermann’s Laccario, who was a half-length ahead of Agave Racing Stable and Sam-Son Farm’s Say the Word. Twelve horses ran in the race.

Earlier in the afternoon, trainer Richard Baltas rung up three winners to forge to the front in the local trainer’s race. He clicked with Yeng Again ($6.00) in Race 1, Gallovie ($7.40) in Race 3 and Lady On Ice ($4.40) in Race 4. He now has 10 winners at the session after 13 days of racing, putting him one up on rival Peter Miller. Baltas was the Bing Crosby Season leading trainer in 2019 with 11 firsts. Miller has won the fall session four different times. There are two days left in the meet.

Racing resumes Saturday at 12:30 p.m. with a nine-race card.

JOEL ROSARIO (Arklow, winner) – “He broke well and we got a good spot. I stepped on the brakes a little bit because I was comfortable where we were. I saved ground with him, then moved up a little bit outside. I could tell we were going slow so I felt OK being closer with him. He was running good. When we turned for home, I knew he was a fighter and I knew he’s be tough to beat. He finished strong. He’s a good horse.”

BLAKE COX, son of and assistant to Brad Cox (Arklow, winner) – “It kind of worked out the way we had drawn it up. Joel (Rosario) was able to get a real good stalking position and then finish strong. What’s next will be up to Jerry Crawford and Donegal Racing, but I wouldn’t be surprised if the Pegasus World Cup Turf is on the radar. ”

The stakes win was the first of the meet and first in the Hollywood Turf Cup for rider Rosario. He now has 29 stakes wins at Del Mar.

The stakes win was the first at Del Mar for trainer Cox.

The winning owners are Jerry Crawford of Donegal Racing from Des Moines, Iowa, along with Joseph Bulger or the Estate of Peter Coneway.