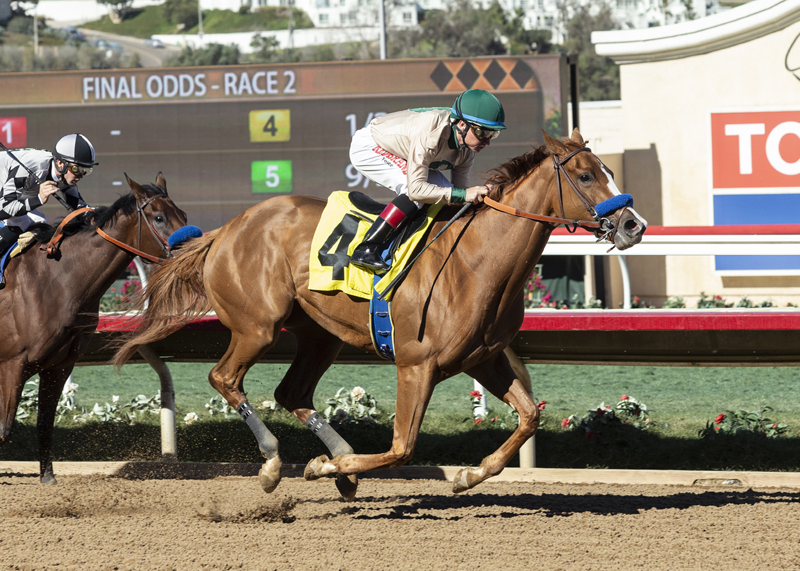 Summer Wind Equine’s Chasing Yesterday, who began her career as the much-ballyhooed sister of 2015 Triple Crown champion American Pharoah, came through as anticipated Monday with a decisive victory in the featured $100,000 Desi Arnaz Stakes, feature of a special Veterans Day program at Del Mar.

Facing only two two-year-old filly rivals after the withdrawals of Der Lu and Andyoushallreceive, Chasing Yesterday responded to the urging of jockey Drayden Van Dyke in the stretch to outfinish Itsjustanillusion and win by a length and one-half in 1:23.81 for the seven furlongs. Third, another length and one-quarter farther back, was Boujie Girl.

Chasing Yesterday, another talented juvenile from the powerful stable of trainer Bob Baffert, was scoring her third triumph in four starts. After impressively breaking her maiden in her career debut last summer at Del Mar, the filly was shipped to New York where she was seventh in the Grade I Spinaway at Saratoga. Returning west, she won the Anoakia Stakes at Santa Anita in early October.

The daughter of Tapit and Littleprincessemma went to the gate the 1-2 favorite and paid $3. Because of the small field, the race offered only win wagering. Chasing Yesterday earned $60,000 to increase her money-winnings to $144,250.

DRAYDEN VAN DYKE (Chasing Yesterday, winner) – “She got away from there just a little bit awkwardly and we spotted them some. But that turned out to be a blessing. She got a little breather on the backside. Then that wind (coming into the stretch) was really bad.  Comes right at you. But she’s a good filly and she got it done.”

(Del Mar has been experiencing wind gusts estimated at 30- to 40 miles per hour.)

FLAVIEN PRAT (It’sjustanillusion, second) – “We were under pressure all the way. Not the best of circumstances.”

RAFAEL BEJARANO (Boujie Girl, third) – “These three-horse races are tricky. You can’t really tell what’s going to happen. She was in hand early, but got a bit tired late.”

BOB BAFFERT (Chasing Yesterday, winner) – “She’s matured a lot and she’s starting to grow and she has been working great. I saw her get away third and for three horses this was a tough race. There’s nothing easy about the races in California. She’s only run one bad race and that wasn’t her fault. I sent her back east when I should have kept her here for the Debutante. But hey, sometimes you call the play and it’s a fumble.”

The stakes win was the first of the meet and the second in the Desi Arnaz for rider Van Dyke. He won this race last year – also for trainer Baffert – on Dream Tree. Van Dyke now has 23 stakes wins at Del Mar.

The stakes win was the first of the meet for trainer Baffert and second in a row in the Desi Arnaz (Dream Tree).  He now has a track record 127 stakes wins at Del Mar.