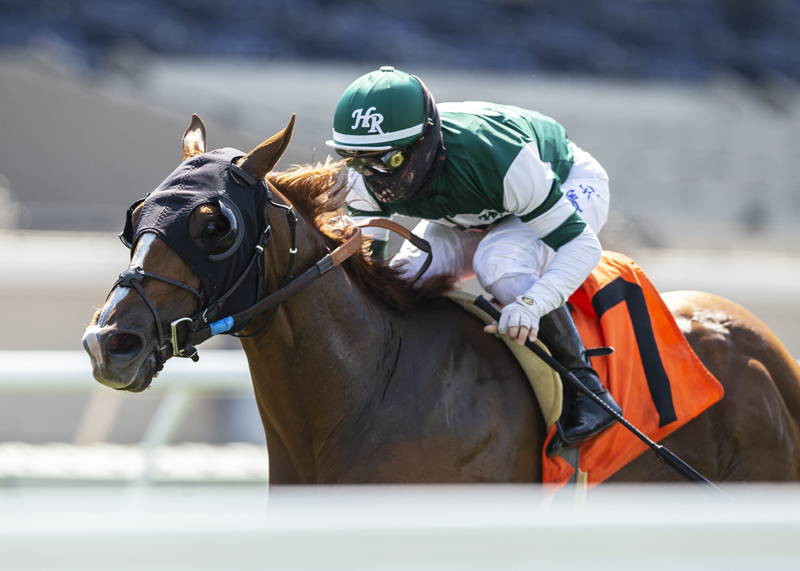 Hronis Racing’s Chaos Theory, a recent private purchase by trainer John Sadler for his main owners – Pete and Kosta Hronis -- made good on his first trip over the grass in California with a come-from-behind, one-length tally in Saturday’s $101,000 Green Flash Handicap.

The 5-year-old gelding, who was last seen in action at Churchill Downs in Kentucky on June 14, was handled today by Umberto Rispoli, the newcomer to Del Mar this season who has shown a special affinity for its grass course. The Green Flash score was his sixth stakes victory of the meet with five of them coming on the turf. He’s now won 23 turf races in 69 tries, a remarkable 33% clip on the green.

UMBERTO RISPOLI (Chaos Theory, winner)—“It was beautiful.  He surprised me because he broke so sharply.  I figured we’d be a little farther back, but it put us in a great spot just behind the speed.  At this distance you can’t get too far back.  I had a lot of horse turning for home. I thought we’d get there.”

JOHN SADLER (Chaos Theory, winner) – “We’ve got a great grass sprint program in California and Santa Anita is actually adding a turf chute. So we have a variety of distances on the grass and this horse is kind of a specialist -- 5, 5 ½ furlongs so I thought he would be a great fit in California, that’s why we brought him out. He’s a good horse. We were pleased with his race today.”

The stakes win was the sixth of the meet (fifth on grass) for rider Rispoli in his first season at Del Mar.

The stakes win was the second of the meet and second in the Green Flash (2008, Get Funky) for trainer Sadler. He now has 78 stakes wins at Del Mar, moving him ahead of Ron McAnally and into second place on Del Mar’s all-time trainers’ list.

The winning owners – Hronis Racing – are Kosta and Pete Hronis of Delano, CA.