Cedillo Wins His Fifth Race on "Strong" in Let It Ride 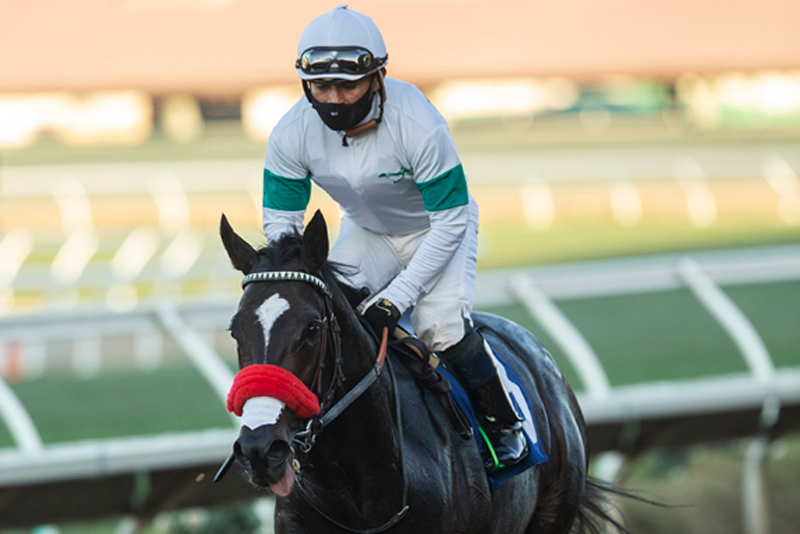 Abel Cedillo said he was feeling “lucky” when racing began Sunday afternoon at Del Mar. He had nine races to ride on the nine-race card and when he won the first one, he said his confidence went up.

By the time the day was done, the 31-year-old Guatemalan was brimming with conviction after finished first five times, including a daring ride in the day’s feature – the $75,000 Let It Ride Stakes aboard Roadrunner Racing or Sayjay Racing’s Strongconstitution that got him home by a head.

The mile grass race for 3-year-olds unfolded well enough for Cedillo as he lay up close along the rail, but heading home he had to step on the brakes as the field bunched at the head of the stretch.  The rider looked outside, but quickly wheeled his Constitution colt alongside the fence where there was the smallest of holes. But both rider and horse were game and they dove on through and then held off Hronis Racing’s Heywoods Beach for the score.

Finishing third three-quarters of a length farther back was MyRacehorse.com or Spendthrift Farm’s Lane Way.

The victory run puts Cedillo on the lead in the local jockey standings after two days of racing to start the 15-day Bing Crosby Season at Del Mar.

Racing returns to the seaside oval Friday with an eight-race card around five Breeders’ Cup Championship races from Keeneland in Lexington, KY.

ABEL CEDILLO (Strongconstitution, winner) – “Five wins today, wow. I was feeling lucky and when I won a close one with that first one (Spielberg by a neck in the first race), I had lots of confidence. Then I rode with that confidence from there on out. I’d won five races on a single day once before up at Golden Gate Fields, but this is a first down here. My horse (Strongconstitution) ran strong in the stakes. We got through inside and he got it done.”

LEANDRO MORA, assistant to Doug O’Neill (Strongconstitution, winner) – “He was training really nice up to the race and that told us he was ready. We got pretty worried up to the last quarter mile because he got blocked pretty good. But when he got through on the rail we were praying for the other one (stablemate Rookie Mistake) get up there too, and it almost happened. Two winners, one a day (on opening weekend for Team O’Neill), which is nice and keeps everybody smiling”

The stakes win was the first in the Let It Ride for Cedillo and his first of the meeting. He now has nine stakes wins at Del Mar.

The stakes win was the in the Let It Ride for trainer O’Neill and his first of the meeting. He now has 39 stakes wins at Del Mar.