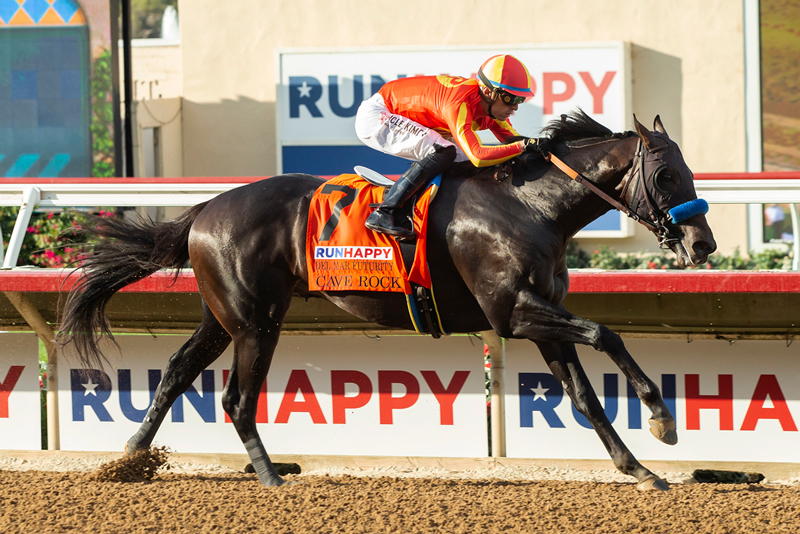 The son of the late champion Arrogate sped seven furlongs in 1:20.99 to establish a stakes record in the seven-panel headliner that shone brightest of 11 races on closing afternoon of the 31-day session. His time eclipsed the 1:21.29 mark established by juvenile champion Declan’s Moon in 2004.

Juan Hernandez, the meet’s leading rider, was aboard Cave Rock as they pulled away by five and a quarter lengths at the end of Del Mar’s championship race for 2-year-olds. The victory was yet another tour de force for Hall of Fame trainer Bob Baffert, who was winning his 16th Del Mar Futurity, a standard that most assuredly will never be outdone.

Finishing second in the 2-year-old special was another Baffert runner, Havnameltdown, who also is owned by the Pegram-Watson-Weitman trio. He had four and a quarter lengths on C R K Stable’s Skinner.

Havnameltdown earned $60,000 for running second in the dash meaning the trio of owners picked up a total of $240,000 for their share of the race’s purse.

The victory was the 12th of the meet for Baffert with a 2-year-old, 10 of them in maiden special weight races and two in stakes. He wound up tying trainer Phil D’Amato for most wins at the meet with 19. It is his eighth training title at Del Mar, but his first since 2003.

JUAN HERNANDEZ (Cave Rock, winner) – “He’s a good horse; very professional. And he’s fast. He broke a step slow, but then he got right in gear and made the running. I tried to slow him down some, but he wasn’t having it. So I just let him go on and do his thing. When we hit the quarter pole, I asked him and he changed leads and took off. He just wanted to go. He’s something.”

MIKE SMITH (Havnameltdown, second) – “He’s (Cave Rock) a beast. I gave myself a chance to be with him but he just took off.”

JIMMY BARNES (Assistant to trainer Bob Baffert, Cave Rock, winner) – “Very nice. Ran fast. Did exactly what he needed to do. Broke out of the gate good, no complications and just opened up. In these races you have to play the break and Juan (Hernandez) took advantage of it and never looked back. Look at the fractions, :21, :43, 1:08, 1:20.  That’s race horse time.”

The stakes win was the (meet leading) 12th of the session for rider Hernandez, but his first in the Del Mar Futurity. He now has 27 stakes wins at Del Mar.

The stakes win was the fifth of the meet for trainer Baffert and his (record) 16th in the Del Mar Futurity. He now has 152 stakes wins at Del Mar, far and away the most by any conditioner.