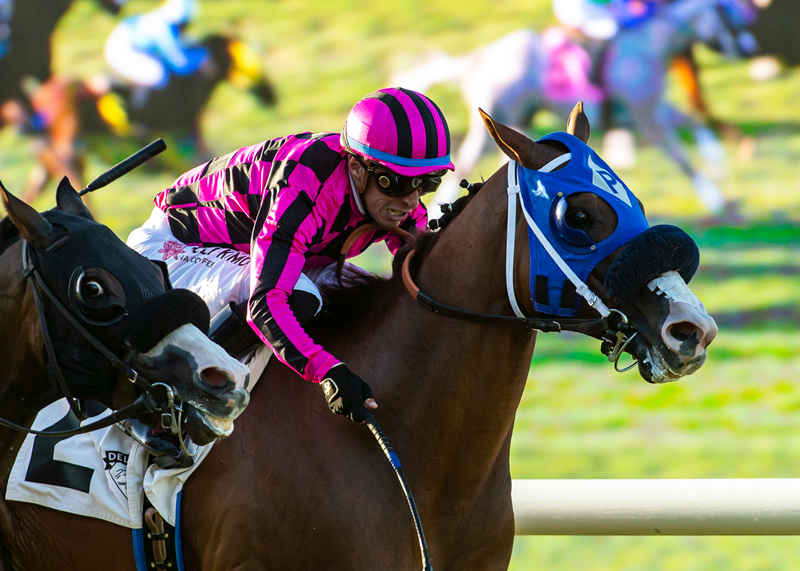 Del Mar’s leading rider, Juan Hernandez, found room on the rail for his mount Carmelita’s Man and forged a gutty win by a head in a blanket finish in Saturday’s $152,500 California Dreamin’ Stakes Saturday afternoon at Del Mar.

The score, Hernandez’s fifth stakes victory on Day 10 of the seaside meet, was worth $85,500 to owners Larry or Ann Jett for their 5-year-old gelding by Mucho Macho Man who is trained by Dean Pederson.  Finishing second in the California-bred affair was Mr.-Mrs. T.A. Shapiro’s Bang for Your Buck, who had a nose on Sondereker Racing, Felkin, et al’s The Chosen Vron.

The winner increased his bankroll to $362,038 with his sixth win in his 16th start. He’d won the Crystal Water Stakes for Cal-breds at Santa Anita on May 28 in his previous start.

Racing will resume at Del Mar Sunday with a first post of 2 p.m. for the 11-race card.

JUAN HERNANDEZ (Carmelita’s Man, winner) – “He’s the kind of horse you can do whatever you want with him. I know this horse, I trust him a lot. I knew I had the horse and I was just waiting for some room to come through. They opened, then we come through and we win the race. He’s a real professional horse.”

DEAN PEDERSON (Carmelita’s Man) -- “Until they put the numbers up, I was hoping for the best. Horse has been very honest and very consistent. We’ve spotted him well; it’s a pleasure to win these kind of races.”

The stakes win was the fifth of the meet for rider Hernandez, but his first in the California Dreamin’. He now has 20 stakes wins at Del Mar.

The stakes win was the first of the meet for trainer Pederson, but his first in the California Dreamin’.  He now has two stakes wins at Del Mar.

The winning owners, Larry or Ann Jett, are from Santa Ynez, California.