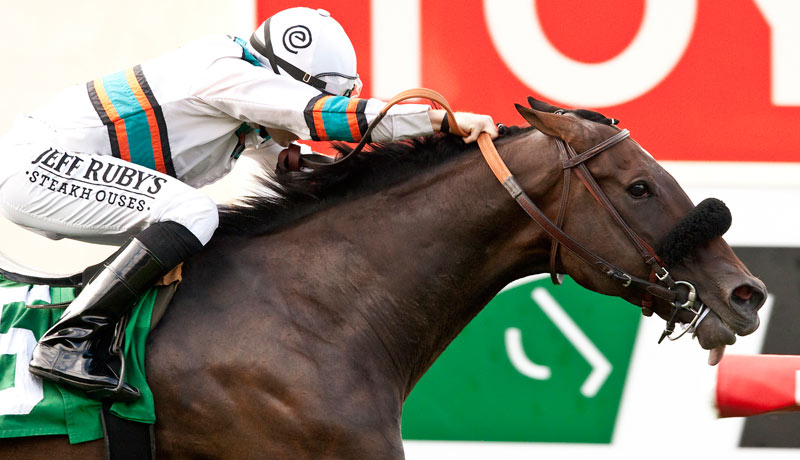 JOE TALAMO (Weewinnin, winner) – “He was game. I’ve got to give Brian (trainer Brian Koriner) credit. He took the blinkers off this horse today and he was better for it. When he had the blinkers, he would wait. Now when he sees those other horses, he fights on. He did all the work today.  I just had to stay out of his way.”
COREY NAKATANI (Rock Me Baby, second) – “Craig (trainer Craig Dollase) said be patient with him. I let him settle and we had a good spot. He fired and ran a good race. The time was quick. He ran really well.”
FLAVIEN PRAT (Poshsky, third) – “Maybe if he’s quicker, I can get a better spot. But that’s not him. He’s one-paced, so I had to stay where I was. He ran well.”
BRIAN KORINER (Weewinnin, winner) –“It seemed like he wouldn’t see horses coming and they would go by him, so we took the blinkers off so he could see them and Joe seemed to think it made a difference. This was his fifth race off a (13-month) layoff. He’s had his problems in the past but he’s doing well now. We gave him some time (since June) waiting for this race.”
FRACTIONS:  :23.36  :47.26  1:11.47  1:35.19  1:41.14
The stakes win was the first of the meet for rider Talamo, but his second in the California Dreamin’ (Bruce’s Dream 2010). He now has 38 stakes wins at Del Mar.
The stakes win was the first of the meet for trainer Koriner and his first in the California Dreamin’.  He now has four stakes wins at Del Mar.
Weewinnin is owned by E-Racing.com of James Atwell of Sunnyvale, CA; Dr. William and Jilly Gray, and Janet Lyons.