Brandothebartender Gets Up Late to Win California Dreamin' Sunday 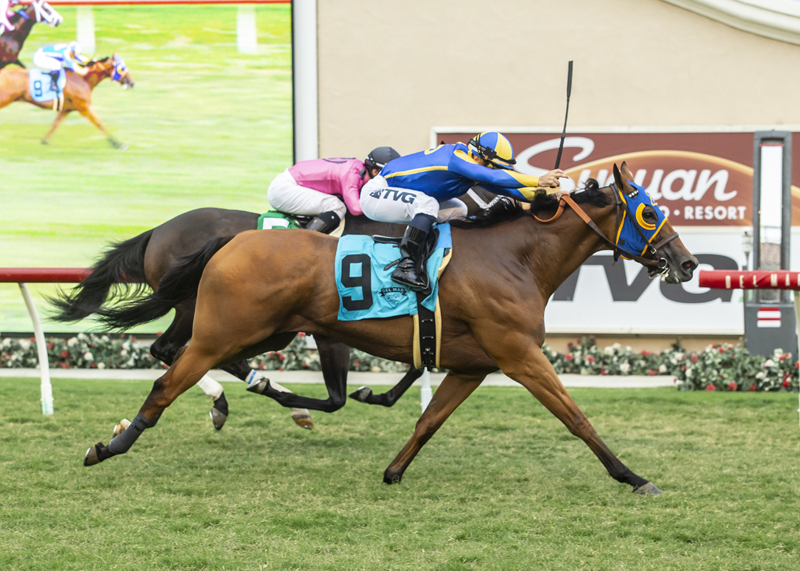 The hard-knocking veteran Brandothebartender set ‘em up and knocked ‘em down late Sunday in capturing the $152,000 California Dreamin’ Stakes by a half length at Del Mar.

The 8-year-old gelding by Tribal Rule made the 46th start of his career a winner and took down the top share of $85,500 from the purse for California-breds. He now has total winnings of $772,864 after six seasons at the racetrack and a performance record that reads 46  9  7  15.

Umberto Rispoli was aboard the winner, the 12th time he’s ridden him in a race. The bay veteran is trained by Craig Dollase, who got his owners to invest $40,000 in claiming him three years ago at Del Mar. The ownership group consists of Flawless Racing of Jerry Weseloh and Brian Flanagan, both of San Diego, and Michael Jarvis of Manhattan Beach, CA.

Finishing second in the mile and one-sixteenth on the turf was Barber or Wachtel Stable’s Indian Peak and running third was Messineo or Sands’ North County Guy.

Earlier on the card the 4-year-old filly Superstition walker her beat as the race favorite in the $90,380 Daisycutter Handicap, running five furlongs on turf in :56.89 and paying $6 to win. The daughter of Ghostzapper is owned by Perry or Ramona Bass and is trained by Hall of Fame conditioner Richard Mandella. She was handled by Del Mar’s leading rider, Flavien Prat, who was scoring his third win on the afternoon.

The track’s Pick Six bet was not hit again Sunday meaning there will be a carryover of $328,081 into Thursday’s return to racing. First post will be 2 p.m.

UMBERTO RISPOLI (Brandothebartender, winner) – “I love this horse. I know him better than my son (the rider has ridden him in 12 races). It’s unbelievable. He’s such a cool horse to ride. You can do anything with him – sprint, long, grass, in front, come from the back. He does it all. You just ask him and he does it. Somehow I knew Flavien (rider Flavien Prat on Indian Peak) was going to make that early lead (he went to the lead on the far turn), so I said ‘I’m following him.’ Then my horse did his thing. So much fun to win on him for his wonderful ownership group and to win here at Del Mar. It’s all the best.”

CRAIG DOLLASE (Brandothebartender, winner) – “The owners are just a great bunch of people; we were so lucky to get this horse two years ago off the claim (for $40,000) and he has been a gem. He’s such a fighter in the lane and he did it again. He’s eight (years old) and he doesn't know it.”

The stakes win was the first of the meet for rider Rispoli and his first in the California Dreamin’. He now has nine stakes wins at Del Mar.

The stakes win was the first of the meet for trainer Dollase, but his second in the California Dreamin’ (Rock Me Baby, 2014). He now has12 stakes wins at Del Mar.