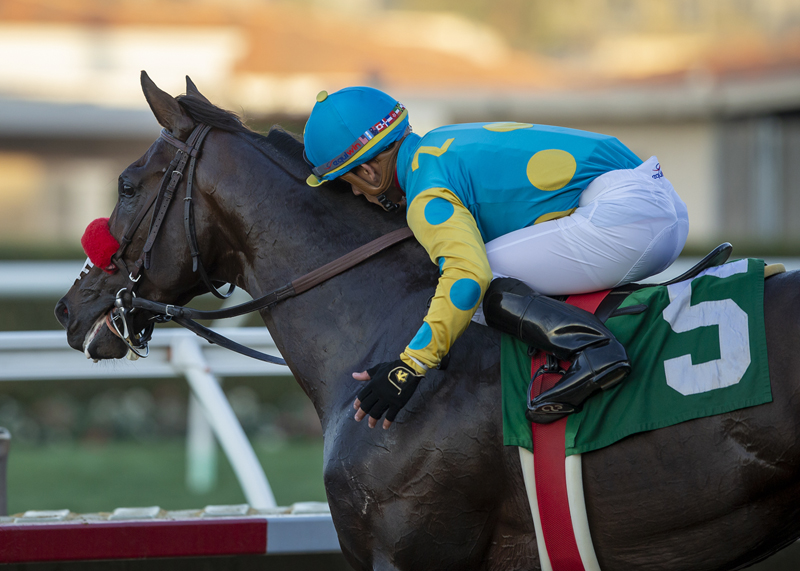 Out of action since winning the Eddie Logan Stakes late last year, Bob and Jackie returned to competition victoriously, nosing out Proud Pedro to win the featured $77,550 Let It Ride Stakes for three-year-olds Saturday at Del Mar.

Ridden by one-time star apprentice Heriberto Figueroa, Bob and Jackie won a head-bobbing finish by the narrowest of margins over Proud Pedro, who was piloted by Rafael Bejarano. Figueroa also won the third Saturday aboard Twirling Tiger.

Third in the field of five was Ocean Fury, the 8-5 favorite who was three-quarters of a length behind the runner-up and a nose in front of fourth-place Dueling.  Golden Birthday, the early pacesetter, faded to fifth and last. Withdrawn from the contest was Carnivorous.

Jockey Drayden Van Dyke had a saddle triple, scoring with three two-year-olds, the French-bred filly Guitty in the fourth race, the well-bred debuting colt Authentic in the fifth and finally, in the ninth race, Uncaptured Hero, trained by Baltas.

Racing resumes Sunday with a nine-race program starting at 12:30 p.m. Featured will be the $100,000 Desi Arnaz Stakes for two-year-old fillies at six furlongs.