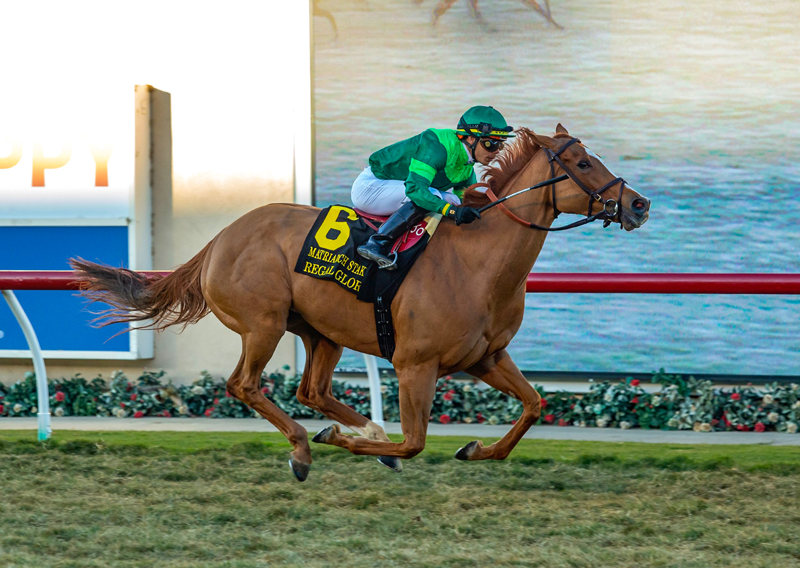 Del Mar’s ninth Bing Crosby Season will finish strongly Sunday with a nine-race card enhanced by the 42nd edition of the Grade I, $400,000 Matriarch Stakes for fillies and mares as the highlight of the afternoon.

Adding additional luster to the fall finale is the Grade III, $100,000 Cecil B. DeMille for 2-year-olds.

The Matriarch, which goes as Race 7, will be headed by its defending champion, Peter Brant’s Regal Glory, a 6-year-old multi-millionaire mare who captured last year’s edition of the stakes by two and a half lengths in a front-running effort. All told, the sparkling daughter of Animal Kingdom has won 12 of her 22 starts – most of them stakes – and banked a total of $2,379,134.

Regal Glory ran one of the few lackluster races of her career last out in the Breeders’ Cup Mile against colts at Keeneland on November 5, but the fact that trainer Chad Brown put her on a plane headed west less than a month later speaks well of how she recovered from that effort. Top rider Flavien Prat has the call.

Brown has some serious history with the Matriarch at Del Mar. Of the eight runnings so far, he’s shipped in and sent out the winner four times. And he’ll be favored to do it again Sunday.

In the Cecil B. DeMille, Pegram, Watson and Weitman’s Speed Boat Beach well could be the one they’ve all got to beat. The Florida-bred by Bayern announced himself smartly when he broke the track record at Del Mar on September 10 in his racing debut, covering five and a half furlongs in 1:01.86 in a straight maiden race. Subsequently he captured a turf stakes at Santa Anita, then went unplaced in the Breeders’ Cup Juvenile Turf Sprint at Keeneland. Trainer Bob Baffert has given the call on his colt to Prat.

Here are the fields for the two stakes in post position order with riders and morning line odds:

Besides all the usual closing day activities, the track also will offer a mandatory payout on its popular Pick Six Single Ticket Jackpot bet. Going into the Friday program, the wager’s carryover was approaching the $400,000 mark and the bet could be worth multiple millions come Sunday. First post that day is 12:30 p.m.