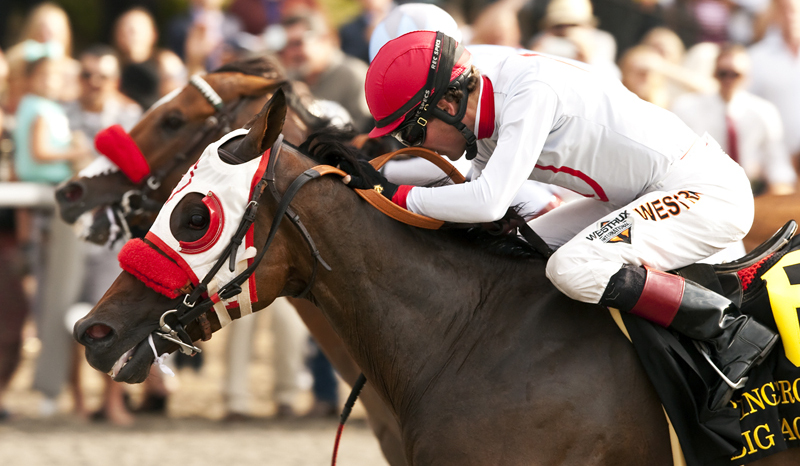 Claimed for $20,000 from a maiden race at Del Mar last summer, Big Macher climaxed his rise to  stakes prominence with an upset of odds-on favored Goldencents in the featured Grade I $300,000 Bing Crosby Stakes Sunday.

With Tyler Baze in the irons, Big Macher held off the furious closing rush of Goldencents in the final sixteenth to win by a half-length in 1:08.82 for the six furlongs.

Seeking the Sherif, who battled with the winner entering the stretch, faded to third, 1 ½ lengths behind Goldencents and a length in front of Indexical in the field of seven sprinters. Wine Police was scratched from the original field.

Big Macher, a four-year-old gelded son of Beau Genius owned by Tachycardia Stables and Mansor and trained by Richard Baltas, was claimed by his present owners July 17, 2013 from a maiden claiming race in which he finished seventh of 12 horses after breaking slowly.

He broke his maiden three starts later for a $40,000 claiming tag at Santa Anita and since then has won five of eight races with two seconds and a third. The Crosby marked his first start since he won the Grade II Portrero Grande at Santa Anita in April.

Additionally, since the Bing Crosby Stakes is part of the Breeders’ Cup’s “Win and You’re In” series, all B.C. entry fees for Big Macher will be paid.

Goldencents, winner of the 2013 Breeders’ Cup Dirt Mile, finished second for the second year in the Bing Crosby, losing by a head to eventual Eclipse Award sprint champion Points Offthebench last summer. The four-year-old, who was ridden by Rafael Bejarano, conceded two pounds to the winner, 123-121, in a valiant effort.

In the afternoon’s supporting feature, the $150,500 California Dreamin’ Handicap for older California-bred horses, favored Rock Me Baby and jockey Corey Nakatani scored a come-from-behind triumph, defeating Starspangled Heat by 3 ¼ lengths Originally scheduled to be run on the infield grass course, the stakes event was moved to Del Mar’s main track. The time was 1:42.88 for the mile and one-sixteenth.

Rock Me Baby, trained by Craig Dollase and owned by West Point Thoroughbreds, earned $85,500 and paid $6.20.

Kent Desormeaux, back on the West Coast after competing in the Midwest in recent years, continued his hot riding as he booted in three winners – Friendly Banter in the third, Tiz a Kiss in the fourth and Kool Kat in the ninth.

TYLER BAZE (Big Macher, winner) – “Did I get any special instructions? Oh, no. I gave the instructions. Richard (trainer Richard Baltas) tends to be a little serious. He was all wound up in the paddock. I said: ‘Richard I got this. Don’t worry.’ I have so much confidence in this horse. He’s all racehorse with a huge, huge heart. I get on him in the mornings and I know how good he really is. They’ve found out he does well with time between his races. They gave him some time for this and he came back running. I had a beautiful trip today and I had the right horse.”

RAFAEL BEJARANO (Goldencents, second) – “He tried hard. He broke good and had good speed, but I didn’t want to go to the front with those other ones. I sat in a good spot behind them, then – when we came into the stretch – they were fanned out in front of me and I had to go around them. He finished strong, but we just ran out of racetrack.”

EDWIN MALDONADO   (Seeking the Sherif, third) – “I’m on a speed horse and I missed the break.”

RICHARD BALTAS  (Big Macher, winner) -- “This is my first Grade I. It’s my dream … my dream. The horse has been nothing but spectacular, getting better and better. He had a little setback (quarter crack) after his last race that really wasn’t much. Tyler had more confidence in the horse than I did. You can’t teach heart to a horse, he either has it or he doesn’t. You just do the best you can do and hope the horse has the will to win. This horse does. ”

The stakes win was the first of the meet for Tyler Baze and his second in the Bing Crosby. He now has 23 stakes wins at Del Mar.

The stakes win was the first ever at Del Mar for Richard Baltas.

The winner is owned by by Tom Mansor of La Mesa, CA and the Tachycardia Stables of Brendan Bakir of Malibu, CA.

COREY NAKATANI (Rock Me Baby, winner) – “He needed that last race (Bertrando at Los Alamitos). And he’d been going gangbusters in the mornings. I knew he was going to run big today. He’s a nice horse and he showed it. Polytrack or turf – it wasn’t going to matter today. He was going to run big no matter what you put him on.”

The stakes win was Nakatani’s 100th at Del Mar.

STEWART ELLIOTT (Starspangled Heat, second) – “I had a good trip. And he gave me a nice late kick. Good race for him. The winner just kept on running. That happens sometimes.”

RAFAEL BEJARANO (Ethnic Dance, third) – “He didn’t like the track. He was jumping up and down out there. I think if it is on the grass, it is a different story.”

CRAIG DOLLASE (Rock Me Baby, winner) -- “This horse deserved this race after getting beat a head in it last year. Corey (Nakatani) is just getting to know him a little bit and he was real patient with him. He got the big move and finished well. We could go in the Breeders’ Cup Turf Sprint or the Dirt Mile (in November at Santa Anita).”

The stakes win was the first of the meet for Nakatani and his first in the California Dreamin’.  It is his 100th at Del Mar, second best on the all-time list to Hall of Fame rider Chris McCarron (134).

The stakes win was the first of the meet for Dollase and his first in the California Dreamin’.  He now has 10 stakes wins at Del Mar.