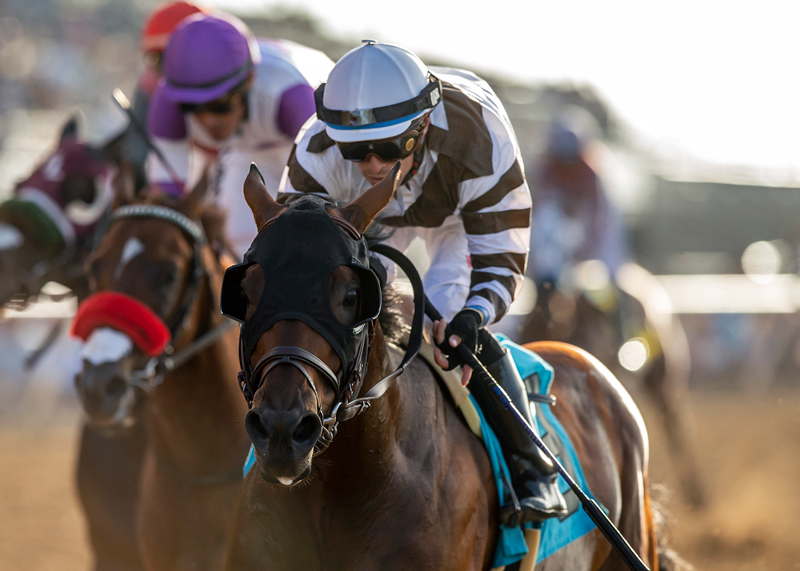 William Peeples’ Big City Lights did what he does best Friday at Del Mar when he went to the front early, then just couldn’t be caught late as he captured the $176,000 Real Good Deal Stakes by a length and a quarter.

The racy colt by the California sire Mr. Big cut out early splits of :22.14 and :44.27 in the seven-furlong headliner, then just kept on going under Del Mar’s leading rider Juan Hernandez to register his third win in his third start. He’s trained by Hall of Fame conditioner Richard Mandella.

Finishing second in the stakes limited to California-bred or sired 3-year-olds was Reddam Racing’s Slow Down Andy, who had a length and a quarter on the show horse, Lovingier, Fasihuddin or Navarro’s Finneus.

For the ninth straight time, players in the track’s Pick Six Single Ticket Jackpot wager couldn’t tab all half dozen and the track’s carryover in the bet rose to $608,414. There is a “mandatory” payout on the wager tomorrow, which means those with the most winners will get a payout of the entire pool. If past form on these bets holds true, fans can expect $3- to $3.5- million to be added into the pool tomorrow chasing the big money.

First post Saturday is 2 p.m.  The Pick Six will start on Race 6, which goes off at approximately 4:35 p.m.

JUAN HERNANDEZ (Big City Lights, winner) – “He broke well and was running well right from the start. Mr. Mandella (trainer Richard Mandella) told me to just play it as it comes up. He said I shouldn’t take anything away from him. When we went past the five-eighths (Pole) he really wanted to go, so I just let him. He was comfortable and so was I. He got a little tired at the end, but he got it done. He’s a nice horse.”

RICHARD MANDELLA (Big City Lights, winner) – “It’s nice to have the outside post where we don’t have to rush and worry about getting trapped. So I said ‘Just let him break and if he wants to go to the lead that’s fine; if he settles, do that.’ He settled for a little bit and then went on.”

The stakes win was the fourth of the meet for rider Henandez, but his first in the Real Good Deal Stakes. He now has 19 stakes wins at Del Mar.

The stakes win was the second of the meet for trainer Mandella and his first in the Real Good Deal Stakes. He now has 72 stakes wins at Del Mar, fifth most among all trainers.