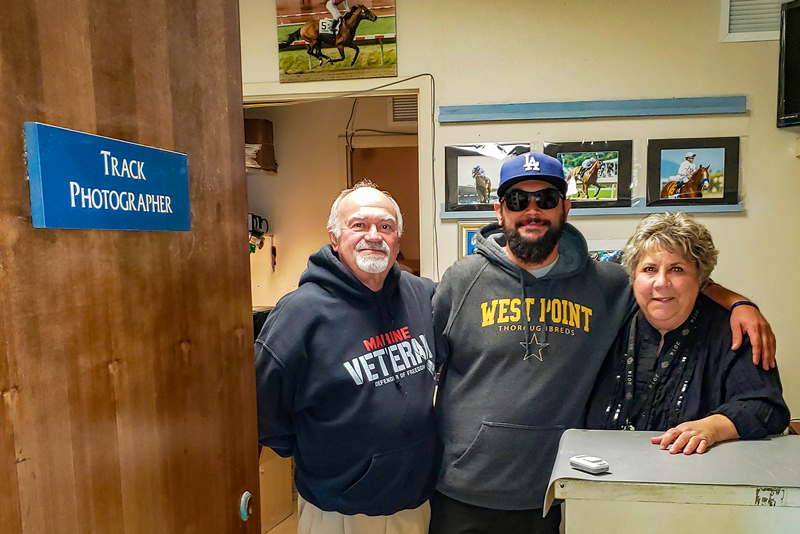 The estimate, possibly conservative, is that the family group – Rayetta Burr, Tom and T.J. Abahaze – have chronicled 10,000 races at Del Mar since Benoit Photo became the official track photographers in 1996.

The father, son and stepmother are positioned trackside at the start of each race, snapping shots as the fields go by the finish line the first time and again when they complete the circuit in longer races. In one-turn events, circumstances dictate that their focus be only on the finish.

Then they’re tasked with recording, always for the victorious horse’s connections and sometimes for posterity, the winner’s circle ceremonies. To capture, in year’s past on film and now digitally, the joy of the humans and the majesty of the equine in the moments immediately after a triumph.

Think about the last time you tried to pull a celebratory segment from a reunion or holiday family gathering and get them all to stop for a minute and turn their attention to a camera. Now think about having to do it eight or nine times a day, with just a few minutes to get it done and, oh yes, include a 1,100 pound animal not long removed from a minute or two of all-out exertion.

But the Benoit trio nearly always make it seem easy.

With the owner groups, which could range from a handful to hundreds in place, the horse and rider are brought in one side of the area. Rayetta and T.J. flank Tom as he takes control of the proceedings. “Cell phones down,” he’ll say. “We’re going to take two pictures. Everybody look here.”

Tom is an ex-Marine and Vietnam veteran.

“You learn how to control a crowd in the service if you’ve got rank,” he said. “You have to. If you don’t, everything runs amok. I try not to yell at an individual, but if I have to, yell at the whole group.”

They aim their 35-millimeter Canon cameras, fire away very briefly, then repeat the procedure with just the immediate connections – and the rider who has just weighed in – in the pictures.

Then comes their favorite part of the job.

“The people,” T.J. offered instantly as Rayetta and Tom nod in agreement. “The look on their faces, especially when it’s their first win. You show them the picture and their faces light up and they lose their (composure). It’s priceless.”

With modern systems the photos can be ready for purchase in a half hour or so. What once were darkrooms for film development are now computer stations where Burr and the Abahazes process photos for sale to interested parties, distribution to the media or other purposes.

Since its opening in 1937, Del Mar has had contracts with five individuals or groups to do its photography – Joe Haase, Bill Scherlis, Vic Stein and Associates, Dick and Elna Boardman and Benoit and Associates.

The stories of all five were capsulized, and some of their photos displayed, as part of the 2006 Del Mar Media Guide.

Haase, only the second man in the U.S. Navy to carry the title Photographers Mate and the first to take a picture of Washington’s Capitol building from the air -- in 1913 – was hired when the track open, served for more than two decades and is credited with virtually all the iconic shots of track founder Bing Crosby.

Scherlis moved from Philadelphia to San Diego as a youngster, got into photography as a teenager and hired on as Haase’s “society photographer.” He catalogued the track’s many celebrity patrons throughout the 1940s and ‘50s, took over when Haase died in 1959 and held the track photographer position through 1975.

Vic Stein, who was the official photographer for Hollywood Park, Santa Anita, Los Alamitos and the Los Angeles Rams for many years, took over at Del Mar from 1976 to 1980.

Dick and Elna Boardman, who started as portrait photographers in their native Nebraska, got racetrack experience at Centennial Park in Denver, where they were the first in the west to print color racing photos, before contracting with Del Mar in 1981. Nebraska was the main residence for the Boardmans, and Del Mar their summer home from 1981 to 1995 when they returned to the Cornhusker State and Benoit Photo took over at Del Mar.

Burr started as a switchboard operator at Hollywood Park then moved to the publicity department headed by Bob Benoit.

Tom Abahazy was born in Germany, the son of a master photographer in Hungary and Germany, and was brought to America at the age of two. He learned from the master when his Marine time was over and was working with his father at Oaklawn Park in 1974 when photos they took of Miss Musket winning the Apple Blossom Handicap were brought to the attention of Hollywood Park owner Marge Everett.

A couple years later, Tom and his first wife were summoned to shoot for the Inglewood track and worked closely with Burr and Benoit, before moving back to the Midwest.

Later Benoit, no longer in administration at Hollywood Park, and Burr founded the photography business that bears his name. It got started only after they convinced Abahazy to relocate with his family, which now included T.J. and a sister, in Southern California.

Photography school is not on the resume of any of the three. Tom learned from his father, T.J. and Rayetta from Tom.

T.J. was been a fixture at track photographer offices since he was a baby in a bassinette. He became a Benoit full time employee in 2004, working at Arlington Park in Chicago.

Tom and Rayetta now count 50 years in the racing business. Benoit photo has been the official winner’s circle photographers for 16 Breeders’ Cup World Championships, starting with the inaugural in 1984 and going all the way through to last weekend’s at Del Mar.

The estimated 10,000 photos at Del Mar represent only a fraction of the ones they’ve taken at Hollywood Park, torn down and replaced by the NFL’s SoFi Stadium, Santa Anita, Los Alamitos, Pomona and several other tracks across the country. Like all racetrackers, they’ve learned to deal with the highs and the lows.

“It’s really tough on us when things go bad, if you know what I mean,” T.J. said. He related as how, several years ago, his close friend, jockey Michael Baze, was injured in a spill not far from where he stood and how he had to fight the urge to rush to his aid and let the professionals, at the ready, do their job.

“We have to keep a professional demeanor no matter what,” Burr said. “I can come back to the office and bawl my eyes out, but out there on the track, I have to stay under control. That’s what we’ve been trained to do, and no matter what we want to do, we have to stay out of the way or clear a path for others.”

Del Mar, the backdrop for so many of their pictures, has aspects they have come to appreciate.

“I would say Del Mar is the most exciting place for people to come and experience racing,” Burr said. “More people ask us about Del Mar than any other track. It’s like jockeys always asked about the Kentucky Derby, when people learn that we’re track photographers, they ask about Del Mar.”

“If a person has never been to a racetrack in their life, they should come to Del Mar on opening day,” T.J. said. “This would sell them and (provide) everything they need to know about racing.”