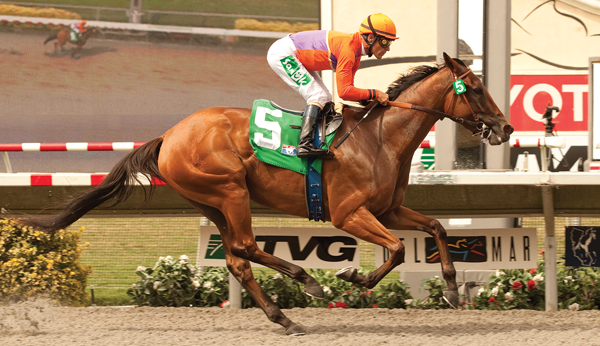 Two-time Eclipse Award winner Beholder, a winner of 12 of 17 career races and $3.4 million, heads a powerful field of nine older fillies and mares Saturday in the 45th running of the Grade I $300,000 Clement L. Hirsch Stakes.
The Hirsch Stakes is part of the “Win and You’re In” series wherein the winner is automatically eligible to the Breeders’ Cup Distaff on October 30 at Keeneland with travel expenses and entry fee paid by the Breeders’ Cup.
Beholder, a champion at two years old and again at three, will have regular rider Gary Stevens in the saddle as she seeks to embellish an already brilliant record in the Hirsch Stakes at a mile and one-sixteenth on the main track. The Richard Mandella-trained Henny Hughes mare is riding a three-race win streak, most recently accounting for the Adoration Stakes in mid-June at Santa Anita.
Among the B. Wayne Hughes-owned mare’s ten stakes successes are victories in the 2012 BC Juvenile Fillies and the 2013 BC Distaff.
Heading Beholder’s opposition are two Grade I winners, Warren’s Veneda, victress in the Santa Margarita in March, and My Sweet Addiction, winner of the Vanity in May. Tyler Baze has the mount on Warren’s Veneda, while Santiago Gonzalez will pilot My Sweet Addiction.
According to allowance conditions, Warren’s Veneda and My Sweet Addiction, will carry 123 pounds, two more than Beholder who figures to be an odds-on favorite.
Other Hirsch entrants are Honey Ride (Victor Espinoza), Legacy (Edwin Maldonado), My Monet (Gonzalo Nicolas), Yahilwa (James Graham), Thegirlinthatsong (Martin Garcia) and Gusto Dolce (Flavien Prat).
Post time for the first of ten races Saturday at Del Mar is 2 p.m.