Beer Can Man Proves Best in C. B. DeMille at Del Mar 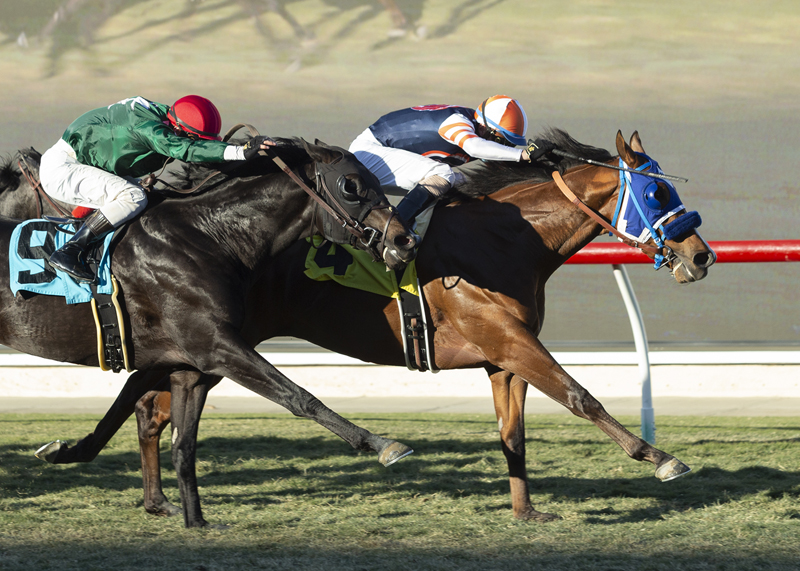 The 2-year-old colt Beer Can Man made his West Coast debut a winning one when he tracked the leaders early, then fired late to capture the seventh edition of the $103,000 Cecil B. DeMille Stakes Sunday at Del Mar.

The bay son of Can the Man scored by half a length under rider Juan Hernandez in the mile on turf run in 1:34.75. He had been competing at Indiana Downs in the Midwest where he’d won two of four starts, but was purchased privately and shipped to the barn of local trainer Mark Glatt.

Beer Can Man is now owned by the racing group called Little Red Feather Racing with their partner Sterling Stables. He picked up $60,000 as his share of the winning purse in the Grade III feature and now has a bankroll that reads $100,580.

Finishing second in the juvenile grass test was Sarah Kelly’s Caisson and running third was Nguyen or Tran’s Commander Khai.

JUAN HERNANDEZ (Beer Can Man, winner) – “One jump out of there he came (back) to me. He settled real well. I just found me spot tracking the leaders and I was happy. At the quarter pole I asked him to go and he did. He really fired. He didn’t want to let horses go past him, either. He’s a nice horse.”

MARK GLATT (Beer Can Man, winner) – “We’ve had him about six weeks. We entered him the first weekend of the meeting, thinking we could run then and then come back in this race. But that race didn’t go. So (the owners) told me to get him ready to go a mile. I was a little skeptical to be honest, but the horse relaxed great, Juan (Hernandez) put a nice ride on him and he got the money.”

The stakes win was the third of the meet for rider Hernandez, but his first in the Cecil B. DeMille. He now has seven stakes wins at Del Mar.

The stakes win was the first of the meet for trainer Glatt and his first in the Cecil B. DeMille. He now has 11 stakes wins at Del Mar.