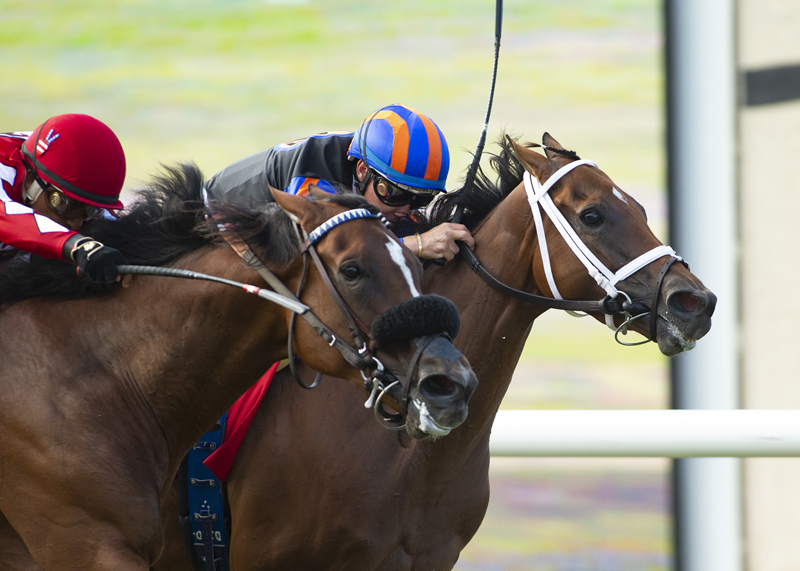 Slam Dunk Racing or Medallion Racing’s Beau Recall, who was up by a whisker to win last year’s Yellow Ribbon Handicap, has come back to Del Mar to try to make it two-for-two in the Grade II, $150,000 headliner for fillies and mares that will be run this Saturday.

The now 6-year-old mare by the Irish stallion Sir Prancealot brings a record of seven wins and eight seconds from 27 starts to the mile and one-sixteenth grass test, as well as a bankroll that reads $1,101,512. Trainer Brad Cox has shipped his well-traveled charge in from New York to defend her title and has assigned Umberto Rispoli to ride.

In all, eight runners have been entered for the 68th edition of the Yellow Ribbon, but one of them – Fox Hill Farms’ Jolie Olimpica – won’t make the fray. Trainer Richard Mandella told racing officials that he’ll wait for another day to bring out his stakes winning filly.

In any event, here’s the entered lineup for the 68th edition of the Yellow Ribbon from the rail out with riders, weights and morning line odds:

Keeper Ofthe Stars, a gray 4-year-old by Midnight Lute, has won seven of her 16 starts, including a smart score this past May 25 in the Grade I Gamely Stakes at Santa Anita. The Jonathan Wong trainee has won more than half a million dollars and has done well with rider Cedillo, her partner Saturday. They’ve rung up three stakes victories together, including that Gamely tally.

Lady Prancealot has chased home Keeper Of the Stars in her last two outings, but was a double stakes winner in her two starts before that. The Irish-bred filly runs out of the barn of trainer Richard Baltas and can brag of $565,841 in winnings so far. Like most in this field, she’s shown a real affinity for the turf.

Bodhicitta rallied to take second in the aforementioned Gamely behind Keeper Ofthe Stars in her best effort to date. The rising 4-year-old by the British stallion Showcasing also comes out of the Baltas barn. She has put in a series of good works at Del Mar for her go in the distaff feature.

The Yellow Ribbon will be Race 9 on the 11-race Saturday program. Also on the card will be the Grade II, $150,000 Best Pal Stakes for 2-year-olds. First post on the afternoon will be 2 p.m.