Ann Of The Dance Upsets
In CTT & TOC Handicap 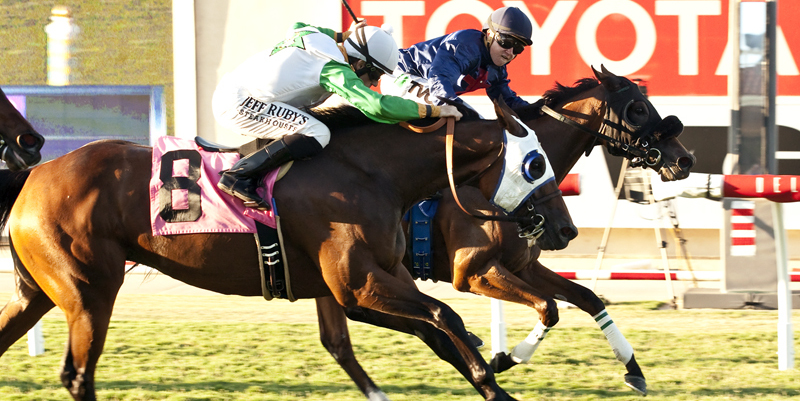 St. George Farm Racing’s Ann of the Dance, overlooked in the wagering at 28-1 despite the presence in the saddle of hot shot apprentice Drayden Van Dyke, got up in the final strides to nose out 11-1 Scarlet Strike in the featured $95,600 CTT & TOC Handicap Friday at Del Mar.

Ann of the Dance, whose racing career had been confined to the East coast until she ran in Del Mar’s Osunitas Stakes a month ago, finishing eighth, obviously relished the marathon mile and three-eighths over the infield Jimmy Durante Turf Course.

Ninth and last in the early stages of the race, Ann of the Dance rallied into contention in the stretch and closed stoutly along the rail for the narrow win. Customer Base, the 8-5 favorite, was third a half-length behind Scarlet Strike and the same margin in front of fourth-place Charlie Em who led into the stretch.

Scarlet Strike, who was piloted by Joe Talamo, paid $11.20 and $5.20 while Customer Base returned $2.80 to show. Topic was withdrawn from the original field.

Ann of the Dance provided Oliver with his second surprise stakes success at Del Mar, the conditioner having won the 2013 Osunitas Stakes with St. George Farm Racing’s Closing Range who paid $35.40 to win. And, last Saturday, Oliver’s wife, Victoria, sent out Personal Diary for a $20.20 upset in the Grade I Del Mar Oaks for the partnership of St. George Farm and G. Watts Humphrey, Jr.

With only a single favorite winning in Friday’s Pick Six sequence, there were no perfect tickets and Saturday’s program will feature a carryover of $106,668. Post time for the first of ten races will be 2 p.m., with the Pick Six presented on races five through ten.