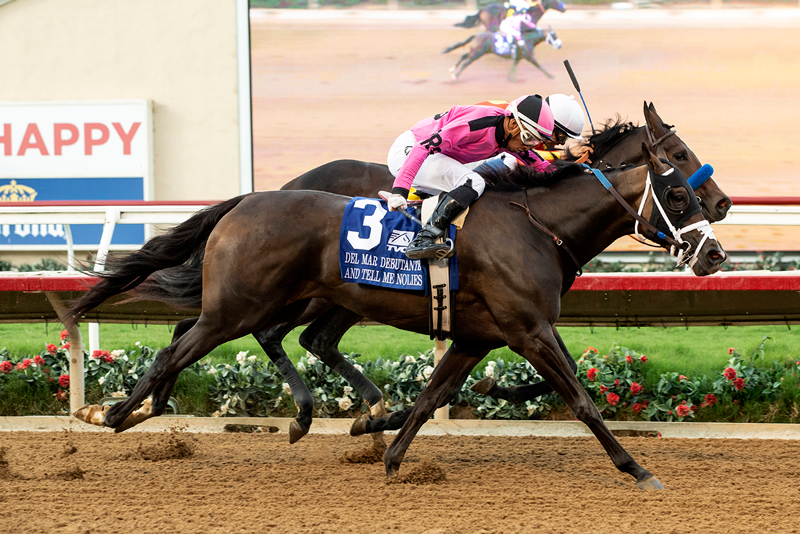 And Tell Me Nolies © Benoit Photo

Peter Redekop’s And Tell Me Nolies dug in late and just caught race favorite Home Cooking at the wire to register a notable upset in Saturday’s Grade I, $301,000 TVG Del Mar Debutante Stakes.

Ridden by veteran Ramon Vazquez, who was recording the first Grade I tally of his career, the bay filly by the late Arrogate covered the seven furlong distance in 1:23.29 to get up by a head. Peter Miller trains the winner.

Home Cooking, who is owned by the partnership of Pegram, Watson and Weitman, went off at odds of 7-10 and just missed. Finishing third, three and three-quarter lengths farther back, was Perry and Ramona Bass’ Ice Dancing.

The TVG Del Mar Debutante is considered the championship event of the Del Mar meeting for 2-yar-old fillies.

RAMON VAZQUEZ (And Tell Me Nolies, winner) – “I told Peter (trainer Miller) that I had confidence in this filly right from the start. I’m glad he was loyal to me and let me ride her in this one. She was a runner all the way today. And I knew I was the winner at the wire. This is my first Grade I win. It is so amazing. I want to thank Peter for giving me this chance. This is amazing.”

PETER MILLER (And Tell Me Nolies, winner) – “I didn’t see a ton of speed on the form. We were drawn inside. I think he (Ramon Vasquez) wanted to get position, which he did. I did like some of the moves he made. At the five-eighths pole when he beat Cedillo (Vegas Magic) to the spot, and then when he got her outside around the two-and-a-half furlong pole, I felt really good.”

The stakes win by jockey Vazquez was his third of the meet, but his first in the TVG Del Mar Debutante. He now has three stakes wins at Del Mar.

The stakes win by trainer Miller was his second of the meet and his second (Set Play, 2007) in the Del Mar Debutante. He now has 46 stakes wins at Del Mar.