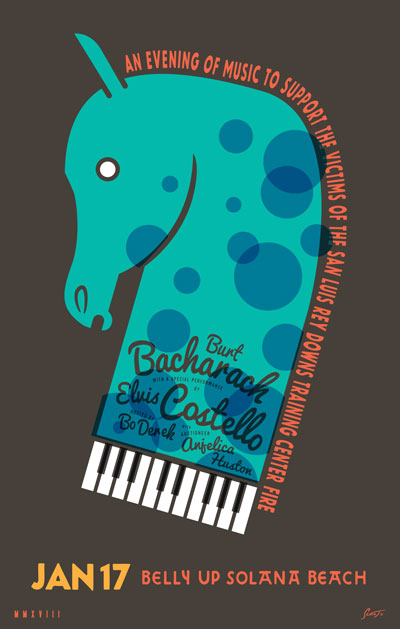 Burt Bacharach, a horse owner and racing fan for 50 years, has announced that he will host a fundraiser for the victims of the tragic San Luis Rey Downs training track fire in Bonsall on December 7 that took the lives of 46 horses and seriously injured several of their caretakers.

The musical event, planned for Wednesday, January 17 will start at 7:30 p.m. with a small auction of special items, notably a chance to sing “Close to You” onstage with Bacharach that evening and a table for four on Opening Day at Del Mar in 2018.

The event will be held at the iconic Belly Up Tavern in Solana Beach, less than a mile from the racetrack at Del Mar, and will be called “An Evening of Music To Support the Victims of the Fire at San Luis Rey Downs Training Center.” Bacharach will be joined on stage during the evening for a special performance by Grammy Award winning artist Elvis Costello.

Bacharach and Costello are dear friends and working mates, having toured together, written songs and collaborated on a Grammy award-winning album.

“Horses and horse racing have given me nothing but pleasure for the last half-century,” Bacharach said. “The horrible circumstances around the San Luis Rey Downs fire cry out for aid in so many ways. This is my way of giving back to the horse community.“

Joining the two musical titans will be Bo Derek serving as the evening’s special MC. Derek is a long-time horse advocate and a former commissioner of the California Horse Racing Board. Partnering with her as Auctioneer for the evening will be Academy Award winning actress and noted animal activist Anjelica Huston.

The Belly Up will be “seating only” for the evening allowing for approximately 400 tickets to be sold for the show. General Admission seats will sell for $250; the venue’s reserved loft seating will go for $450, and seats in the first three rows will be $1,000 each, which will include an after-show champagne reception with Mr. Bacharach.

Additionally, special posters commemorating the evening will be available for sale, including several signed by the artists. A one-day pre-sale of tickets will be available to horsemen and racing fans, beginning at 4 p.m. today. (Click Here for Pre-Sale) Following, tickets to the show will be open to Belly Up regulars and all comers. Tickets for the event are tax deductible.

All monies raised from the evening will be equally shared by California Thoroughbred Horsemen’s Foundation (CTHFcares.org) and the California Retirement Management Account (carma4horses.org). Cliff Goodrich, the executive director of the CTHF, said that funds generated during the evening will be used for people such as the trainers, grooms and stable help who worked at San Luis Rey and were displaced by the fire. Madeline Auerbach, the founding chairman of CARMA and currently a member of the California Horse Racing Board, has indicated that funds raised from the evening will be used specifically for the ongoing aid and care of the horses impacted by the fire that day.