American Pharoah Works Half Mile in :48.80 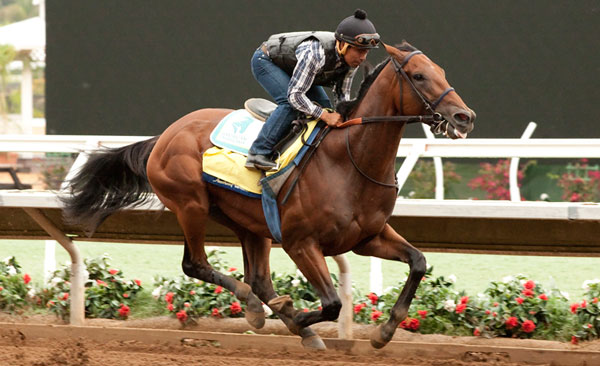 American Pharoah works four furlongs in :48.80 Tuesday morning at Del Mar.
American Pharoah worked a half mile in :48.80 seconds Tuesday morning at Del Mar in the Triple Crown winner’s final serious exercise for Sunday’s $1 million Haskell Invitational at Monmouth Park in New Jersey.
Del Mar’s clockers timed American Pharoah, who was ridden by Martin Garcia, in splits of :12:60, :25.20 and :37.00 for the first three-eighths and had him galloping out five furlongs in 1:01.00 and 1:14.40 for  six.
“He went smooth. He’s ready. We just need a good ship,” said Hall of Fame trainer Bob Baffert.”
American Pharoah ships to New Jersey early Wednesday morning with a scheduled arrival at Atlantic City International Airport at 2 p.m. Eastern time. Owner  Ahmed Zayat, who has been at Del Mar, travels to New Jersy on Wednesday as well, while Baffert’s planned arrival is Saturday.
American Pharoah is scheduled to return to Del Mar either Monday or Tuesday. “I’m on the Pharoah tour now,” Baffert said. “My job is just to keep him in form; keep him happy. I need to make sure he’s ready for anything they throw at him. That’s it now – just keep him healthy and happy.
“Of all my big horses, he’s the easiest (to deal with). You don’t worry about him; he’s easy. You work him, you put him back in his stall, and you don’t have to talk about him the rest of the day. Some of my horses, you’re worrying about this and worrying about that, but him – he’s easy.
“I haven’t looked at the weather back there; it’s usually hot. But it won’t matter. He can handle it.”
Clocker Dane Nelson said: “His usual good work. He went nice and easy with it.”
An estimated 300-400 fans were in the grandstand (a normal morning might see one to two dozen folks out). There were a dozen fans with cameras at the ready at the Baffert barn 15 minutes before American Pharoah emerged from the stall and both backside viewing stands were filled to maximum.
American Pharoah drew a round of applause at the end of his work, a probable first at Del Mar.
Garcia termed the work “smooth and easy.”
Asked if American Pharoah was ready, he smiled and said: “He’s always ready.”