The hottest horse in America – Triple Crown winner American Pharoah – returns to action Sunday at Monmouth Park in New Jersey and racing fans in Southern California are invited to join other “Pharoah” lovers by coming to his “home track” and rooting him on during the Sunday nine-race program at the seaside oval.
American Pharoah, whose last start was his June 6 triumph in the Belmont Stakes that made him the first American Triple Crown winner in 37 years, will run in the $1,750,000 William Haskell Invitational against seven rivals at nine furlongs on the Jersey shore. Post time for the race is scheduled for 2:52 p.m., which places it between Del Mar’s second and third races.
The Haskell will be shown and heard live on the track’s large infield LED board as well as on hundreds of TV monitors throughout the plant.
American Pharoah has been training at Del Mar this summer as he continues his stellar championship campaign. The smooth-striding son of Pioneerof the Nile has put in a series of sharp recent works on the track where he began his career in 2014, highlighted by a smashing score in the Grade I Del Mar Futurity last September 3.
The track is encouraging A.P. fans to dress to impress by wearing their “Pharoah best” and entering the “Pharoah Dress Up Contest.” Check in is at the large fountain in the Plaza de Mexico from noon to 1:30 p.m. next to the lawn jockey with the Zayat silks and the panel of ambassadors and judges. Those wearing their “Pharoah best” – be that human or equine – will automatically win free Clubhouse passes and the grand prize winner – the one deemed “most Pharoah’d out” -- will be hosted at a trackside table for the remainder of the afternoon. 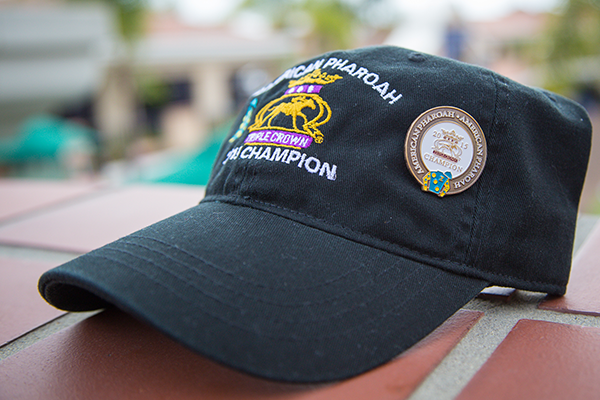 Del Mar’s Silks Gift Shops will feature a collection of American Pharoah items, ranging from original paintings and prints of the star to T-shirts, hats, lapel pins and shot glasses featuring his image.