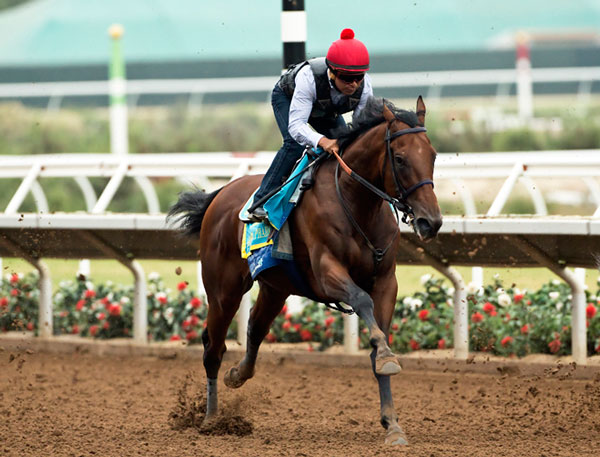 Zayat Stable’s American Pharoah turned in an impressive seven-furlong workout Sunday morning at Del Mar covering the distance in 1:23.20 with regular workmate Martin Garcia in the boot.
The smooth-striding 3-year-old colt went trackside at approximately 7:45 following the mid-morning renovation break and went about his business in an aggressive fashion. Track clockers registered splits of :23.00, :47.20, :58.80 and 1:10.60  en route to his final clocking. He galloped out strongly to the mile in 1:36.40.
Trainer Bob Baffert and owner Ahmed Zayat and members of his family looked on from the Del Mar grandstand.
“He was more aggressive today,” the white-haired conditioner said. “He didn’t work all that fast last week and he wanted to get into it today. We wanted to see where his energy level is – to be sure he still has it. It’s incredible that he does after all this. Then again, he’s an incredible horse.”
Baffert and Zayat were non-comital on the Triple Crown winner’s next start, though many signs are pointing toward next Saturday’s nine-furlong Travers Stakes at Saratoga, a race for 3-year-olds whose purse was raised to $1.6 million as an enticement for him.
The Pioneerof the Nile colt’s most recent tally was an easy score in the Haskell Invitational at Monmouth Park in New Jersey on August 2. He now has won eight of nine starts and more than $5.6 million in purses.