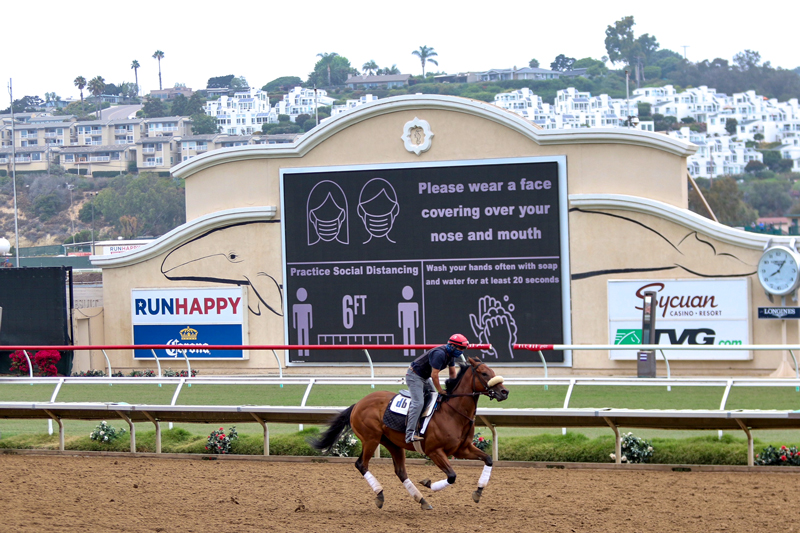 So just up ahead – after this Sunday in fact – Del Mar will wipe its sanitized hands clean of racing in 2020. In a way, the word that fits best for that is “Amen.” But in another way, what an amazingly amazing year it has been.

Like the rest of the country and most of the rest of the world, the COVID-19 thing has turned things anywhere from sideways to upside down in California horse racing. But despite shutdowns, lockdowns, purple tiers and “no you can’ts” raining down, the state – for the most part – kept on racing. And it’s a darn good thing it did.

There’s a simple economic formula at work in that regard:  California has more than 5,000 Thoroughbred racehorses in its midst – big, strong, fast athletes that are pleasing to the eye -- and totally needy. They need to be exercised, groomed, bathed, fed and pampered every day if they are to live and stay healthy. Those things can only happen to them and for them if there is racing.

If racing takes place and wagering follows, portions of the betting build purses.  When owners win purse monies, they in turn can pay their trainers, who next are able to pay their grooms/exercise riders/hot walkers, all of whom do the day-in-day-out things necessary to care for their horses.

Initially, the virus threatened that whole chain of well-being. But racing being an outdoor sport, racing officials rising to the occasion, those directly involved with the horses willing to do whatever it took to continue on, the public responding positively to live athletic events – all of those circumstances allowed for the sport to carry on.

But it wasn’t easy.

In Southern California, Santa Anita in Los Angeles County went to the mat first with the virus and all its ripples and – after taking some body blows – fought back and found a way. Then it came Del Mar’s turn.

Del Mar was up to the challenge by calling on its most valuable resource – the team that calls Del Mar their workplace and their home-away-from-home. Dozens and dozens of them stepped up, putting egos in their back pocket and replacing them with “let’s get it done” attitudes.

First up, there had to be a plan. Two of the track’s stars – senior VP for operations and administration Ann Hall and director of risk management Kim Jacobson – took that one on. Two months worth of figuring, asking, calculating, phoning, cajoling, writing, rewriting, late nights and lots of sweat later the plan was down – 10 pages worth, single spaced.

Officially called the Del Mar Thoroughbred Club COVID-19 Operational Plan, the document covered it all – from the moment the first horse set foot on the grounds to the time when the last horse trailer went out the gate. It spoke directly to what every person and animal was to be about; every when, where, why and how. Backstretch, frontside, racetrack, paddock, jockeys’ room, starting gate, quarantines, cleanings, food, health screenings, masks, wrist bands – and more. Just about every activity that could or would happen at the racetrack was scrutinized and presented. A guiding light in the report was the insightful aid provided by Del Mar’s partners at Scripps Health, led by their chief medical officer, Dr. Ghazala Sharieff, and her expert medical team. 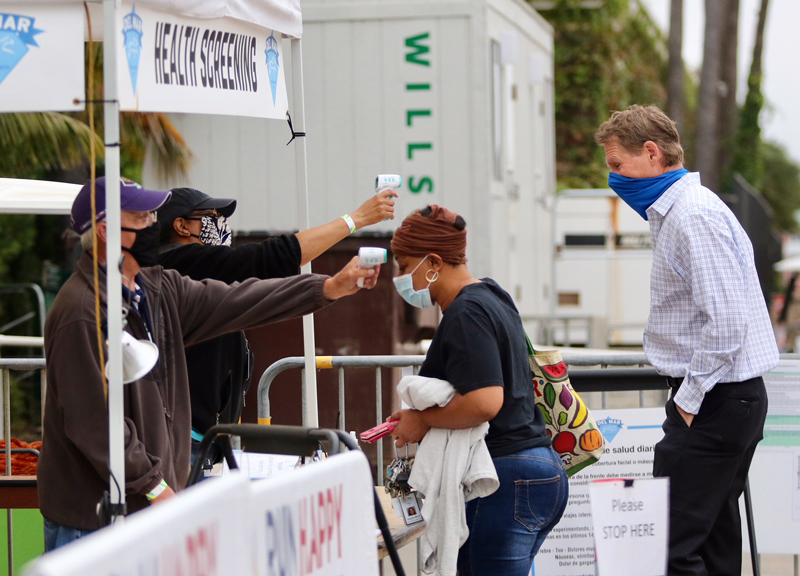 After setting it up, Hall and Jacobson got to live it and make it real.

“Just amazing to see how this has all gone,” Hall says. “Normally around here we plan events well ahead, then make them happen. But with this, every day was something new, something we had to react to. You had to hold on tight and be ready for anything.  Lots of anxiety out there; lots of stress. But you deal with it; you have to.”

“They came out and liked what we’d set up to start,” she said. “They indicated before the meet that it looked like we were ready. Then after we got up and running, they came back and went over it again with us, step by step. Again, we got a green light.”

Then once the racing got rolling, there were Del Mar staff members filling extra roles, tackling the flare ups as they rose up. Some folks had two, three, sometimes as many as a half dozen different jobs and roles that they had to fill.

The track’s ace credentials manager, Mark Bullock, had to wear four or five different hats at different times. His take: “It was really interesting to do someone else’s job and find out what it was all about.”

Ryan Frear, who normally has a nice 9-5 office gig dealing with marketing and sponsors, suddenly found himself at the Stable Gate checking in backside workers from 4 a.m. to noon. “Certainly, it was very different,” he says. “My sleep schedule, well…. But I knew we needed help and I was willing to do that anyway I could. And it’s allowed me to see up close how the backside of the track really works. I think it’s going to help me be better at my ‘real’ job.”

Sue Walls, DMTC’s VP for facilities, was yet another changing out chapeaus. She was the one who had to work with the track’s janitorial staff and its leader, Shayla Ward, to make sure every inch of the track was cleaned repeatedly throughout both meetings. She earned the title “The Queen of Clean” for calling the shots not only on what was to be cleaned, but also what soaps, hand sanitizers and bleaches were to be gotten and used and where they were to be located.

“I got to know our janitorial staff real well,” she states. “They’re a terrific bunch and they work very hard. I also got to fill the role of providing food and snacks to the jockeys, the valets and the racing staff in the jockeys’ room every racing day. I love those guys. They’re just great people to work with.”

She and Bullock combined to obtain and laminate more than a thousand safety signs that were posted all around the facility to call attention to needed things in the time of virus. If you had any doubts about what you should do in most any circumstance, the signs showed the way.

The fall session is running in a similar pattern. The racing is the best in the country right now; it is also the safest, and handle is up a remarkable 25% as the meet heads toward the finish.

It has not been easy. Lots of blood, sweat and tears have flowed. Del Mar dearly misses its fans; the joy of cheer and shouts and claps as they are coming down the stretch is a void that is all but impossible to fill. But Del Mar carries on; it helps to keep the sport alive and going forward in Southern California.

It has, in the end, followed the wise advice offered on safety signs that sit on the walls of all of its restrooms: “Keep Calm and Wash Your Hands.”