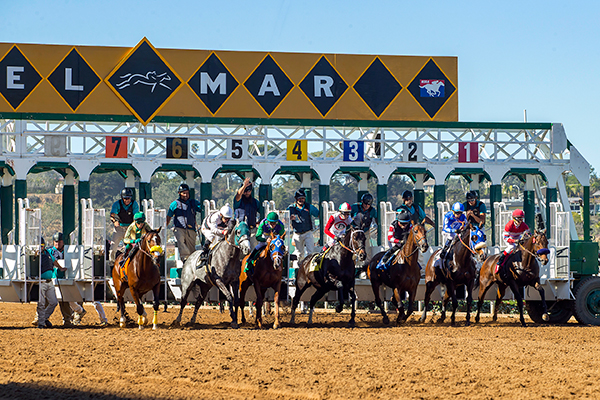 Del Mar Thoroughbred Club will present its eighth fall race meeting – officially titled the Bing Crosby Season in a salute to the seaside track’s founder – with 18 major stakes and a pair of overnights worth a record $3,550,000 planned during a 15-day session starting on Wednesday, November 3.

A highlight of the session will be its two Grade I offerings on closing weekend, the Hollywood Derby and the Matriarch Stakes. Each will carry a value of $400,000, the highest sum ever for a stakes race at the shore oval outside of the $1-million TVG Pacific Classic.

Twelve of the major stakes are Graded – two Grade Is, four Grade IIs and six Grade IIIs. The track has put an emphasis on grass racing during its previous fall stands and that holds true once more with 11 of the stakes, including the last seven, all contested on the deep Jimmy Durante Turf Course. Those seven turf tests will be conducted during Del Mar’s final weekend, staring on Thanksgiving Thursday, November 25 and continuing through closing day on Sunday, November 28.

“This is the best fall stakes schedule we’ve ever presented,” said DMTC vice president and racing secretary David Jerkens. “The success of Del Mar racing over the past two years has allowed us to partner with our horsemen and horsewomen in this robust schedule. We think it will be an attraction to good horses from across the country.”

As in past years, Del Mar’s racing office plans to card eight races during its weekday cards and nine for the weekend programs.