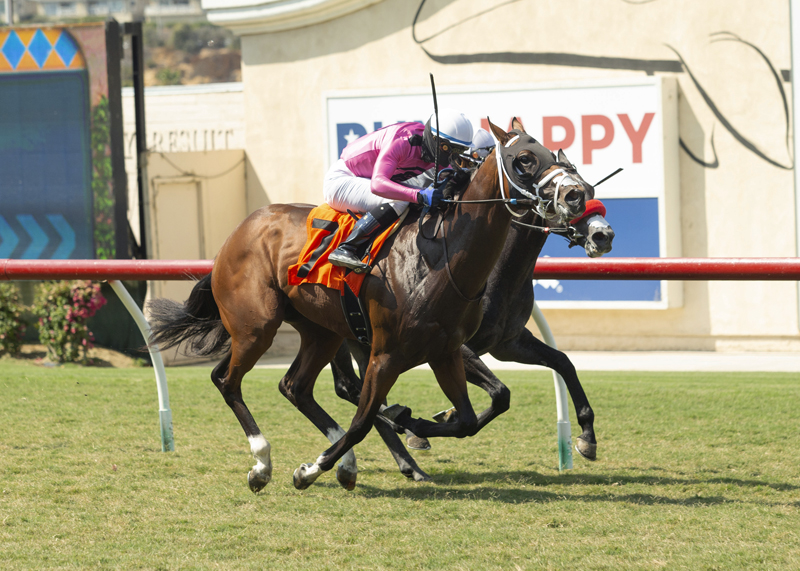 Get Her Number © Benoit Photo

A dozen males and a filly – 2-year-olds all – will go to the post Monday in the 9th running of the Del Mar Juvenile Turf. The race carries a $100,000 purse and will be contested at a mile on the Jimmy Durante Turf Course.

As with many juvenile races at this time of year, past performances are light with most of the runners having only competed once or twice. That means picking favorites, not to say picking winners, is difficult at best and such is the case for this test.

A trio of maiden special weight winners on the local turf could vie for favoritism and vie on the racetrack, too. They are Gary Barber’s Get Her Number, Sarah Kelly’s Caisson and John and Diane Fradkin’s Rombauer.

Get Her Number made her racing debut on August 14 and captured a five-furlong grass sprint. She’s back three weeks later for trainer Peter Miller on the stretch out and will have Abel Cedillo in the tack. The bay colt is a Kentucky-bred by the Mineshaft sire Dialed In.

Caisson, a $340,000 yearling buy at auction, raced greenly in his first start here on July 25, but came back to win a close one at a mile on August 15. Trainer Richard Mandella has assigned Flavien Prat to take the controls Monday on the War Front colt.

Rombauer, a bay by Twirling Candy, scored at first asking on July 25, firing late to be up by half a length in a mile turfer. Mike McCarthy trains the colt for his owners/breeders and he’s gotten Juan Hernandez to accept the mount Monday.

Inner Beauty is the lone filly in the lineup. She’s an Irish-bred by Starspangledbanner who will be making her U.S. debut in the grass stakes. She had five sprint starts in her native land this year, winning one of them.

Big Fish stretched out to a mile and switched to the grass here on August 21 and came away a winner in a maiden special weight test. He’s a gelded son of the Dynaformer sire Mr. Big.

Sonic Brees will be making his first start on the green and first around two turns Monday after a trio of dirt tries. The Maclean’s Music ridgling finished fourth in the Best Pal Stakes August 8 in his most recent effort.

The Del Mar Juvenile Turf is the 9th race on an 11-race program Monday that begins at 1 p.m.  It is part of Del Mar’s 27th and final day of its 81st racing season.