10 Try Sunday's California Dreamin'; Superstition One to Beat in Daisycutter 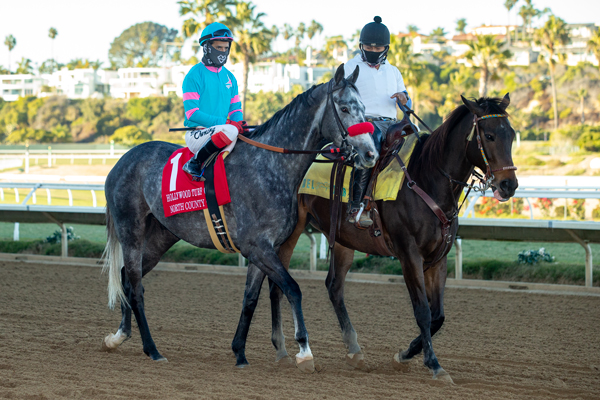 Del Mar will offer a pair of stakes Sunday – one a “major” event and the other an “overnight.”

The “major” is the 16th edition of the California Dreamin’ Stakes, a mile and one-sixteenth on the turf for California-bred 3-year-olds and up. It offers a purse of $150,000. The “overnight” is the $80,000 Daisycutter Handicap, a turf dash of five furlongs for older fillies and mares.

Brandothebartender beat North County Guy by three quarters of a length when last they met on April 24 in the Crystal Water Stakes for California breds at Santa Anita.

Galilean, a full horse by Uncle Mo, won this race last year by half a length. The bay has six victories in 13 starts – two of those scores having come on the green -- and sports a $583,098 earnings statement. He’ll be making his first start of the year Sunday.

The Daisycutter – a racing nickname for a good grass horse – has 12 horses placed in entry, though only 10 will wind up running.

Leading the crew is the 4-year-old Ghostzapper filly Superstition, who races for Perry and Ramon Bass and is trained by Hall of Famer Richard Mandella. The Kentucky-bred has finished in the top three in eight of her nine starts and shows an earnings ledger of $193,140.

Barber and Eclipse Thoroughbred Partners’ Bulletproof One is extra quick and may take a fair bit of catching from the rail. The daughter of the fast horse Idiot Proof has won seven of 14 starts and $361,162 in purses.

Also to be considered in the sprint is the unbeaten 4-year-old Bruja Escarlata, a Street Boss 4-year-old who has won all three of her career outings. The Hronis’ Racing’s filly last went postward on March 27 at Santa Anita when she took an allowance sprint on the main track.

There will need to be a scratch from the main body of the race for either of the also-eligibles to run.

The Daisycutter goes as Race 7 on the 10-race program. The California Dreamin’ is Race 9.  First post for the afternoon is 2 p.m.